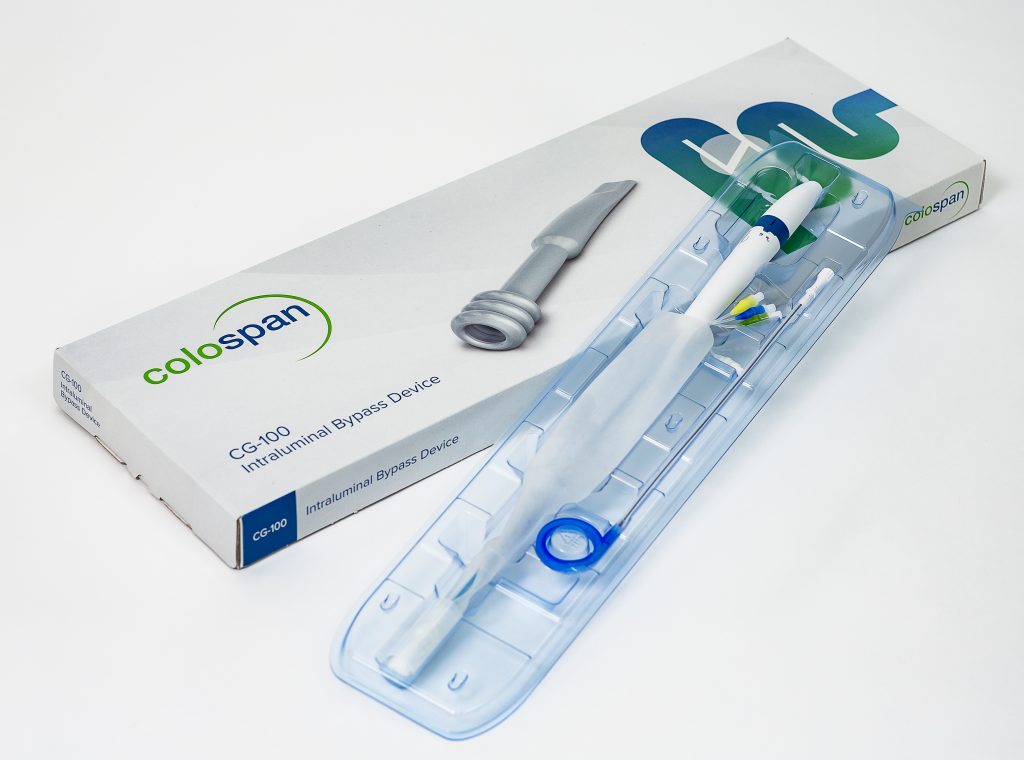 The Colospan (Kfar Saba, Israel) CG-100 is designed to reduce the rate of diverting stoma and related complications by diverting fecal material from contacting with the anastomotic site during the initial critical healing period. The device itself is comprised of a tubular silicone sheath that is introduced into the lumen of the intestinal tract through the anus, using a designated delivery system. The sheath is positioned proximal of the anastomosis. At the distal part of the sheath there are three inflatable balloons and an extra-luminal ring which encircles the colon.

The diameter of the balloon is slightly larger than that of the ring, preventing the sheath from moving downstream beyond the ring location, while still allowing it to move freely inside the colon, preventing damage to the colon wall. After ten days, when the risk for anastomotic leakage is reduced, the sheath is removed under x-ray guidance without any additional surgical intervention, in a procedure that requires only a few minutes. The CG-100 has received the European Community (EC) mark of approval and has been granted an U.S Food and Drug Administration (FDA) investigational device exemption (IDE).

“Colospan will launch a prospective, randomized pivotal study which is a leap forward towards bringing our novel device closer to the market,” said Boaz Assaf, CEO of Colospan. “The pivotal study will allow us to assess the potential of our device to improve patients' lives, significantly reduce healthcare costs, and as a result empower physicians to deliver an improved standard of care.”

The major concern of colorectal surgeons is anastomotic leakage of colon content into the abdominal cavity, which often necessitates a diverting stoma to prevent anastomotic leakage during the healing period. But diverting stoma is known to cause significant complications during its presence, which can last up to six months, and as a result of the second procedure required for stoma closure. Given the risks associated with stomas, a temporary diversion solution can provide surgeons as an alternative, short solution.