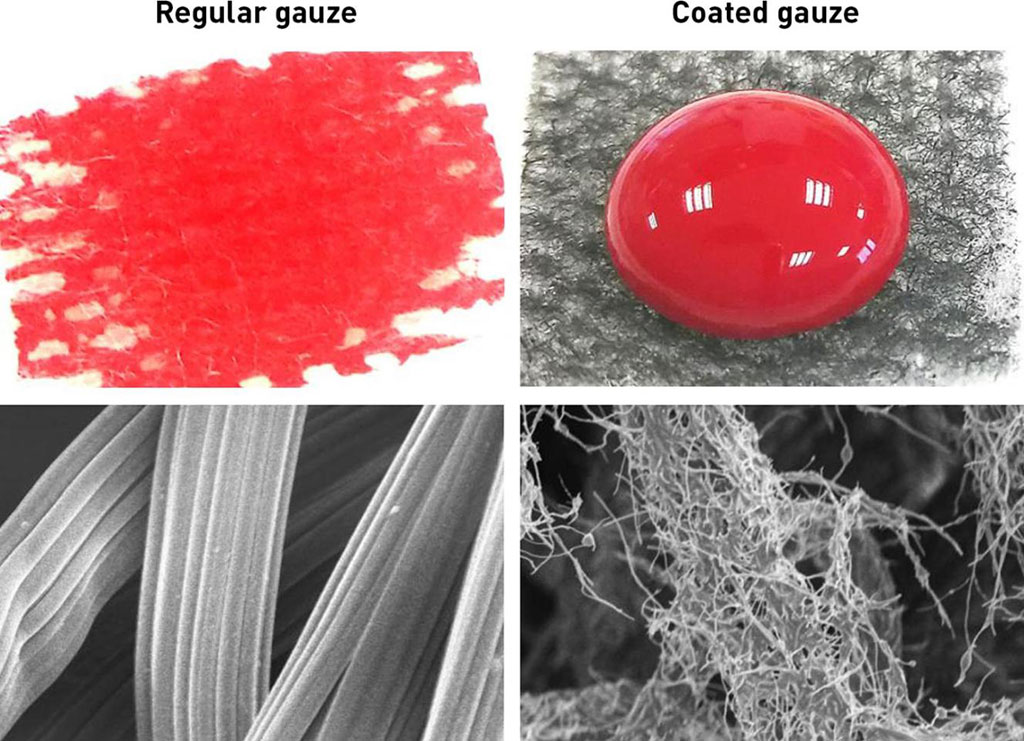 Developed at the Swiss Federal Institute of Technology (ETH; Zurich, Switzerland) and the National University of Singapore (NUS, Singapore), the new bandage is based on a SHP surface with immobilized carbon nanofibers (CNFs), which promote fast fibrin growth and convey anti-bacterial properties. The hemostatic surface simultaneously promotes fast clotting with no blood loss, and due to the presence of micro-air pockets within the blood-substrate contact area, there is minimal contact between the clot and the SHP CNF patch, leading to natural detachment after clot maturation and shrinkage.

To verify the features in vivo, experiments were performed on rats with the back-bleeding model. While normal gauze absorbed blood and left behind an open wound, no blood was observed seeping through the CNF gauze, demonstrating excellent blood-repelling property. Further, a darkened gel-like clot was observed under the CNF gauze after three minutes, which properly sealed the wound, as opposed to the wound that remained open under the control gauze. The average blood loss was just 1.5% of that for the normal gauze. The study was published on December 5, 2019, in Nature Communications.

“With the new superhydrophobic material, we can avoid reopening the wound when changing the bandage,” said study co-author Athanasios Milionis, PhD, of ETH. “Reopening wounds is a major problem, primarily because of the risk of infection, including from dangerous hospital germs, a risk that is especially high when changing bandages.”

The conventional method to deal with bleeding is mechanically pressing the wound with a cotton gauze, which causes unnecessary blood loss and gauze adhesion onto the wound. Blood absorbed in the gauze forms a solid clot-gauze composite, forced peeling of which often tears the wound and causes secondary bleeding and pain. This makes it difficult to replace the old wound dressing without causing secondary infections or hemorrhage, in procedures ranging from common wounds to surgery, and to the extreme case of hemophilic patients, where excessive bleeding will occur before coagulation.