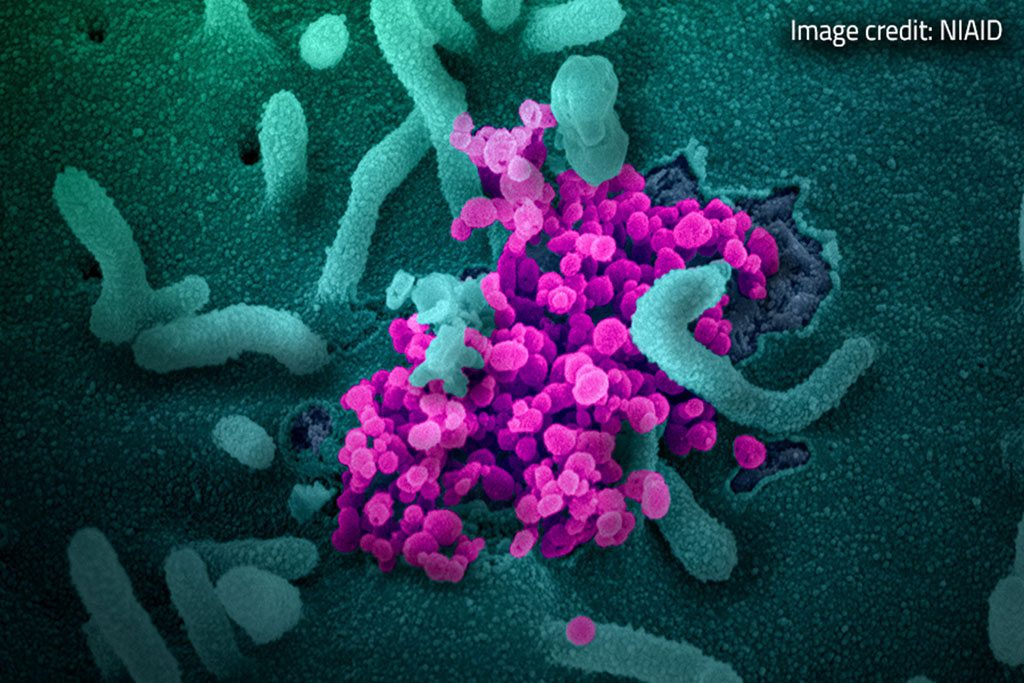 Image: Real-Time Imaging Shows How SARS-CoV-2 Attacks Human Cells (Photo courtesy of NIAID)
Scientists have used imaging assays to view the binding of the spike, or protein, on the SARS-CoV-2 virus to ACE 2 (angiotensin converting enzyme 2) and subsequent internalization that takes place when ACE2 and the spike protein interact in real time.

A report by Science X on Phys.org explains how scientists from the NIH’s National Center for Advancing Translational Sciences (NCATS Bethesda, MA, USA) performed real-time imaging to show how SARS-CoV-2 attacks human cells. Researchers around the world have been trying to understand how SARS-CoV-2 interacts with and penetrates host cells in order to block the stage and halt the onset of COVID19. The SARS-CoV-2 virus uses spike proteins to mobilize its viral DNA into a host cell while the ACE2 receptors, which are human cell proteins, open the door for the attack. In previous studies, researchers had been able to tag these receptor proteins with a green fluorescent protein to image their movements. However, details about the spike protein interactions have been gathered mainly from biochemical or proximity assays and tests with proteins and parts of proteins taken from the virus - "pseudo-viro-particles" according to the Phys.org report. As a result of the lack of fluorescent labeling of these viral proteins, researchers have been unable to perform imaging of their role in the ACE2 receptor binding and subsequent internalization - endocytosis.

Scientists at NCATS who had already begun working on various imaging assays for cancers, viruses and lysosomal storage diseases, used their expertise with nanoparticles for cellular delivery and biosensing to aid in the search for COVID-19 drug treatments. The team started looking at potential ways of applying the protein-nanostructure conjugation techniques. With two proteins that share a binding affinity - a quantum dot attached to one and a fluorescing nanoparticle attached to the other - binding between the two proteins brought the nanostructures close enough for energy transfer between them. The resulting fluorescence quenching allowed the scientists to monitor the protein binding, states the Phys.org report.

The scientists then went on to develop a "pseudovirion" with the potent parts of SARS-CoV-2 spike proteins (where the receptor binding domain is situated) attached to the quantum dot in such a way that the spike proteins continue to attack and penetrate cells similar to an active virus. In order to watch the pseudovirion interacting with ACE2 in a real cell, the quantum dot on the pseudovirion was required to be engineered for emitting at a wavelength that was simple to distinguish from the green fluorescent protein on ACE2, as against optimizing nanoparticle quenching. Using the two clear signals, the NCATS scientists could track the binding of the two proteins and subsequent endocytosis. The team could also see that the binding and endocytosis was halted in the presence of two test antibodies.

"What we're doing here is actually visualizing binding of the spike to ACE 2 (angiotensin converting enzyme 2)," Kirill Gorshkov a research scientist at NCATS told Phys.org. "You can actually see that happen in real time. That's the beauty of this assay and that's why we think it will be important for drug screening."