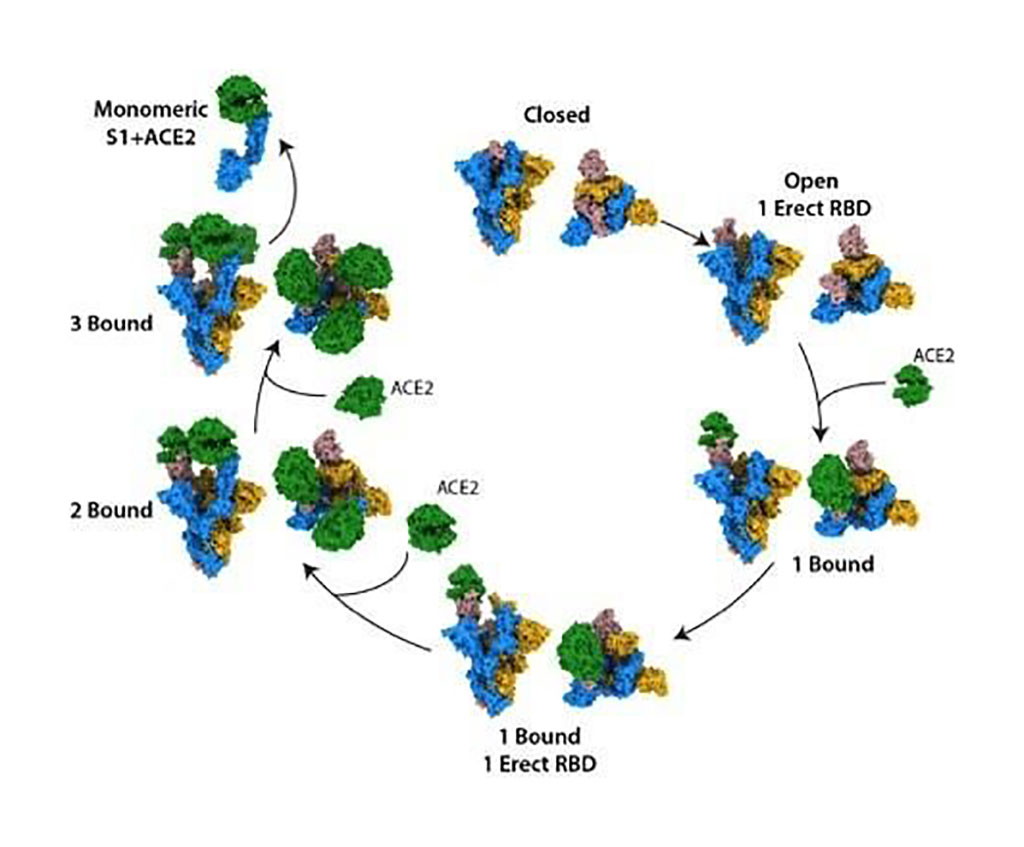 This new insight into the mechanism of infection will equip research groups with the understanding needed to inform studies into vaccines and treatments. The surface of SARS-CoV-2, the virus that causes COVID-19, is covered in proteins called spikes, which enable the virus to infect human cells. The infection begins when a spike protein binds with ACE2 cell surface receptors and, at later stages, catalyses the release of the virus genome into the cell. However, the exact nature of the ACE2 binding to the SARS-CoV-2 spike remains unknown.

In the first study to examine the binding mechanism between ACE2 and the spike protein in its entirety, researchers in the Structural Biology of Disease Processes Laboratory at the Francis Crick Institute (London, UK) have characterized ten distinct structures that are associated with different stages of receptor binding and infection. The team incubated a mixture of spike protein and ACE2 before trapping different forms of the protein by rapid freezing in liquid ethane. They examined these samples using cryo-electron microscopy, obtaining tens of thousands of high-resolution images of the different binding stages.

They observed that the spike protein exists as a mixture of closed and open structures. Following ACE2 binding at a single open site, the spike protein becomes more open, leading to a series of favorable conformational changes, priming it for additional binding. Once the spike is bound to ACE2 at all three of its binding sites, its central core becomes exposed, which may help the virus to fuse to the cell membrane, permitting infection.

“By examining the binding event in its entirety, we’ve been able to characterize spike structures that are unique to SARS-CoV-2,” said Donald Benton, co-lead author and postdoctoral training fellow in the Structural Biology of Disease Processes Laboratory at the Crick. “We can see that as the spike becomes more open, the stability of the protein will reduce, which may increase the ability of the protein to carry out membrane fusion, allowing infection.”

The team continues to examine the structures of spikes of SARS-CoV-2 and related coronaviruses in other species to better understand the mechanisms of viral infection and evolution. The researchers hope that the more they can uncover about how SARS-CoV-2 differs from other coronaviruses, the more targeted they can be with the development of new treatments and vaccines.

“As we unravel the mechanism of the earliest stages of infection, we could expose new targets for treatments or understand which currently available anti-viral treatments are more likely to work,” said Antoni Wrobel, co-lead author and postdoctoral training fellow in the Structural Biology of Disease Processes Laboratory at the Crick.