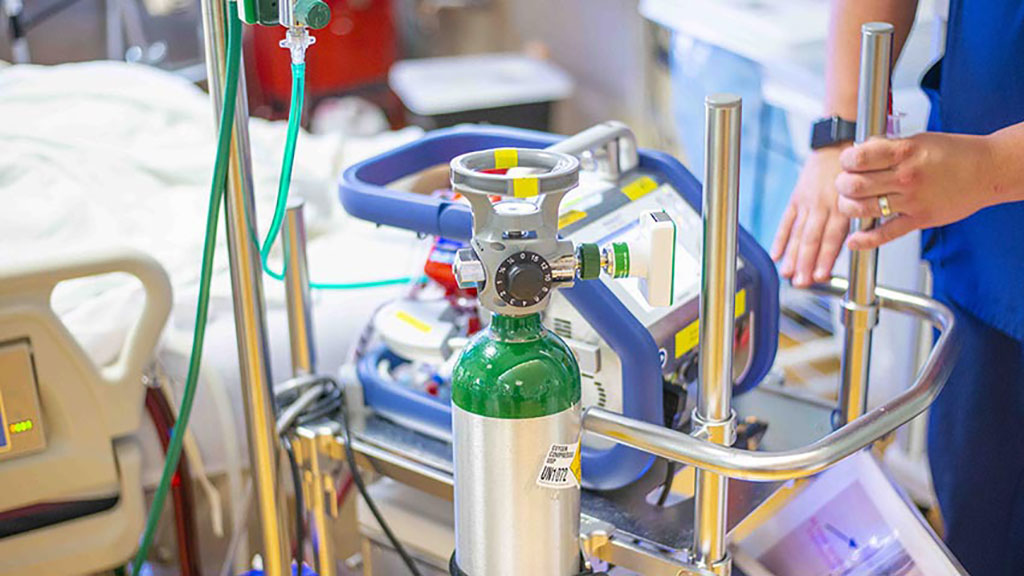 Image: An ECMO circuit in use in the Surgical Intensive Care Unit of Michigan Medicine’s University Hospital (Photo courtesy of Chris Hedly)

The life-support system called ECMO (extracorporeal membrane oxygenation) can rescue COVID-19 patients from the brink of death, but not at the rates seen early in the pandemic, a new international study has found.

The new findings of the study by researchers at the University of Michigan (Ann Arbor, MI, USA) used data from more than 4,800 patients over age 16 who were treated with ECMO for advanced COVID-19 in 41 countries during 2020. The study found that where once about 60% of such patients survived at least 90 days in spring 2020, by the end of the year just under half of COVID patients on ECMO survived that long. The decreased survival over time might be due to a combination of factors, including which critically ill patients clinicians chose to place on ECMO as the pandemic went on, and the treatments the patients had received before they started on ECMO. The new findings show how important it is for hospitals that offer ECMO to choose carefully which patients get access to this labor-intensive level of care. Hospitals should also make policies that can guide such choices when ECMO circuits are in high demand because of a pandemic surge, according to the researchers.

ECMO has been used for decades in select hospitals to treat critically ill children and adults. It takes over for both the heart and lungs temporarily, circulating the blood outside the body under constant supervision of trained providers. At the start of the pandemic, some experts had strong reservations about placing COVID-19 patients on ECMO, for fear of harming their lungs. As more centers began to try it, the survival rate mirrored that of ECMO’s use in other forms of acute lung failure, as the team behind the new study had reported a year ago.

The new study divided the patients into three groups: those treated before May 1, 2020, those treated in these “early adopter” hospitals after May 1, and those treated with ECMO in other hospitals from May 1 through the end of 2020. May 1 was chosen because the evidence for how best to treat critically ill COVID-19 patients had evolved considerably by then. Within the “early adopter” centers, mortality rates increased from 37% in the months before May, to 52% after May. At the centers that did not start providing ECMO until at least May, 58% of the patients died within 90 days of being placed on an ECMO circuit. Patients treated with ECMO later in the pandemic were more likely to have received medications such as remdesivir and dexamethasone, and to have received non-invasive ventilation before being intubated for total breathing support.

Having patients stay on ECMO for a longer time ties up many resources, including the machines and tubing that make up an ECMO circuit, and the specially trained nurses, respiratory therapists and other staff it takes to keep a circuit operating safely. When a hospital has a large number of COVID-19 patients and others in intensive care, the team’s ability to provide the same level of care that they did before the surge can suffer, and mortality might increase. If many hospitals in a region or collection of states are coping with a large number of critically ill COVID-19 patients, it can be hard to find an ECMO-capable hospital to transfer patients to. Sending more ECMO circuits - the pumps, tubes and controllers used in the treatment - to these hospitals is not sufficient; specially trained teams, adequate blood supply and other factors are all needed to support each ECMO patient. This makes it important for ECMO centers to carefully consider which risk factors and personal characteristics might make a patient more or less likely to survive if placed on ECMO, especially if they might need to be on for a while.

“What we noticed right away is that the patients treated later in the pandemic were staying on ECMO longer, going from an average of 14 days to 20 days. They were dying more often, and these deaths were different,” said Ryan Barbaro, M.D., M.S., associate professor at the U-M Medical School and intensive care physician at Michigan Medicine, the University of Michigan’s academic medical center. “This shows that we need to be thoughtful about who we’re putting on ECMO and when we’re making the decision to take patients off who aren’t getting better. Across the U.S. right now, we have places where ECMO is a scarce resource whereas in Michigan it’s not quite at that point, but we anticipate it might be.”