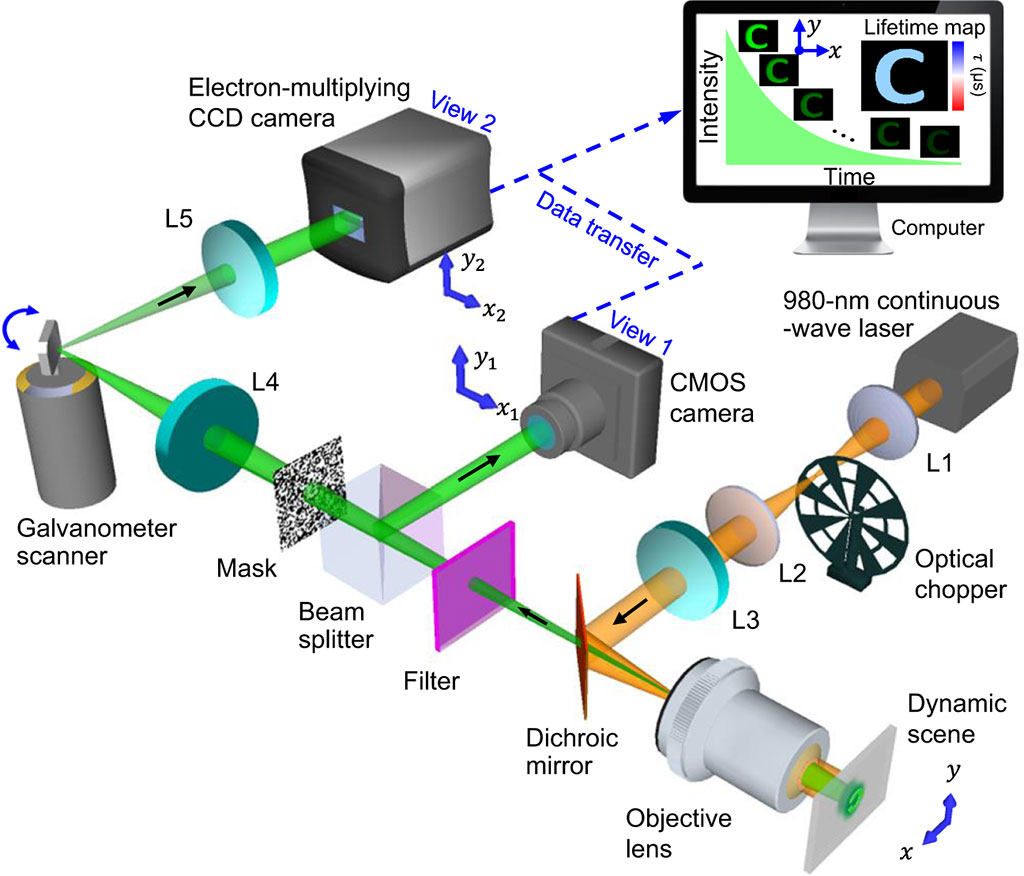 Image: Schematic of the SPLIT system (Image courtesy of INSR)
A novel single-shot photoluminescence lifetime imaging thermometry (SPLIT) system can be used for dynamic temperature mapping, according to a new study.

Developed at Institut national de la recherche scientifique (INRS; Quebec, Canada), SPLIT is based on the luminescence of nanoparticles doped with rare earth ions (Er3+, Yb3+, and co-doped NaGdF4). But instead of imaging luminescence point by point, SPLIT uses an ultrahigh-speed camera to record wide-field luminescence intensity decay compressively, obtaining two views in a single exposure in every spatial point.

In the next step, an algorithm, built upon a plug-and-play alternating direction method of multipliers is used to reconstruct the video, from which the extracted lifetime distribution (how fast the emitted light fades out) is converted to a temperature map. SPLIT can also be used for temperature mapping of a moving biological sample at single-cell resolution, and the researchers also believe that, among other things, it can increase the ability to detect and treat skin cancers. The study was published on November 14, 2021, in Nature Communications.

“Our camera is different from a common one, where each click gives one image: our camera works by capturing all the images of a dynamic event into one snapshot. Then we reconstruct them, one by one,” said lead author Xianglei Liu, MSc, of INRS. “Accurate real-time temperature detection could one day improve photothermal therapy and help in the early diagnosis of skin cancers.”

In the past decade, photoluminescence lifetime imaging (PLI) has emerged as a promising approach to temperature sensing. The lifetime of the luminescent nanoparticles depend on the local micro-environment, thus precluding erroneous measurements in intensity due to change in brightness of the light source, background light intensity, or limited photo-bleaching.