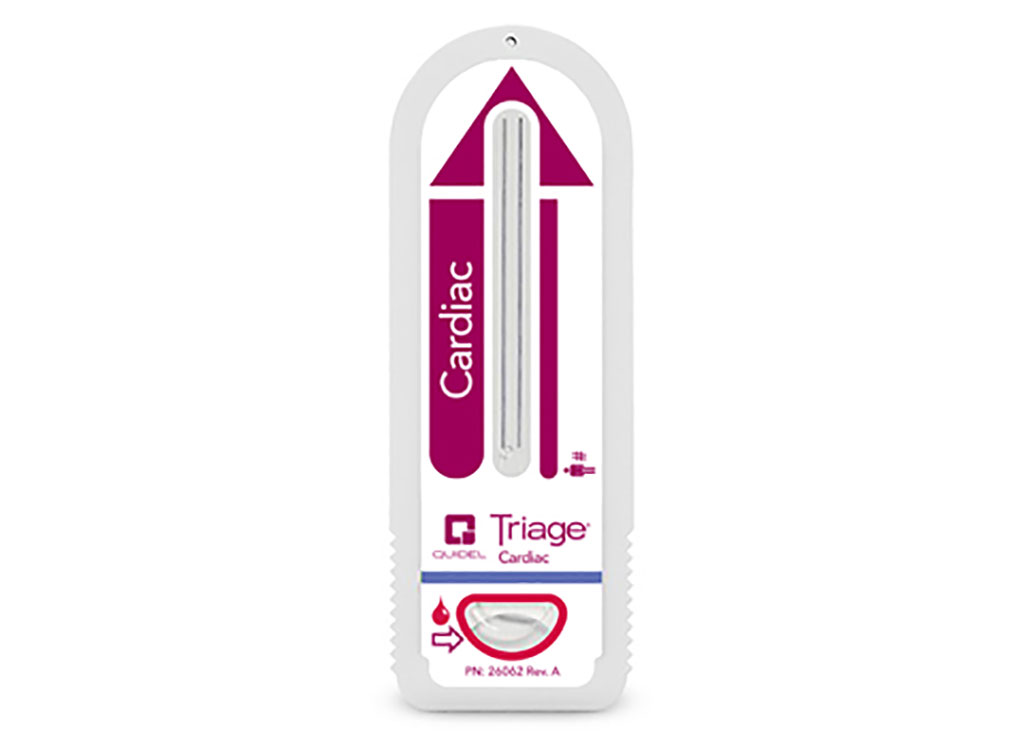 Chest and abdominal pain are the most common reasons that persons aged 15 years and over visit the emergency department (ED). Because both emergency and non-emergency care are provided, symptoms vary widely in their acuity. The ECG is often non-diagnostic with a sensitivity of less than 60%. Atypical symptoms often seen in the elderly, women, and patients with diabetes make the clinical diagnosis even more difficult. Prolonged laboratory results may delay recognition of critically ill patients and initiation of appropriate therapies. It has been shown that quicker treatment times are associated with improved patient outcomes due to an earlier diagnosis. A point-of-care (POC), serial multi-marker testing strategy has been shown to facilitate the rapid diagnosis and management of chest pain patients in the ED.

Quidel Corporation (San Diego, CA, USA) has developed the Triage Cardiac Panel for use in the ED that is FDA cleared to aid in the diagnosis of myocardial infarction. The Quidel Triage Cardiac Panel is a rapid, point of care fluorescence immunoassay used with the Quidel Triage MeterPro. The test is designed to determine the level of creatine kinase MB (CK-MB), myoglobin and troponin I in EDTA anticoagulated whole blood or plasma specimens. This can be used as an aid in the diagnosis of myocardial infarction (injury).

At discharge, it is estimated that as many as 85% of chest pain patients do not have a cardiac diagnosis and myocardial infarction was missed in 2% - 8%. The Quidel Triage Cardiac Panel’s POC multi marker strategy provides meaningful diagnostic information to differentiate acute myocardial infarction (AMI) from other cardiac abnormalities. It has a near perfect NPV (99.9%) that allows for rapid rule out and the potential to decrease ED Length Of Stay (LOS) and turnaround time (TAT). It also has the potential to increase the number of stays less than 24 hours (decreases unnecessary admissions), thereby improving clinical, economic and operational outcomes. The test uses plasma or whole blood samples in EDTA and has time to results of about 20 minutes.

A 2008 retrospective analysis from three HCA hospitals tested chest pain patients using the Quidel Triage Cardiac Panel at one to three hour intervals. Rule-in criteria were (1) any TnI above the AMI cutoff on any draw; (2) a 50% increase in myoglobin levels with any detectable TnI on the last draw; or (3) a 50% increase in myoglobin with a concomitant increase in CKMB. In the retrospective study, most patients were safely evaluated and dispositioned in three hours or less. In the same three-hour window, rule-in patients were identified with a clinical sensitivity of 98.1%. Specificity was 98.1%; accuracy 99.7%; the PPV (positive predictive value) was 92.6%, and the NPV (negative predictive value) was 99.9%.

Additionally, a before and after study at a 567-bed teaching hospital demonstrated operational efficiencies gained by implementing the Quidel Triage Cardiac Panel with a zero, two and four hour protocol. The goal of the ED was to expedite the disposition of patients presenting with chest pain symptoms and move patients to the appropriate treatment pathway. The study demonstrated a reduction of 60 patients (36%) coded as DRG 143 (non-specific chest pain), freeing up needed beds in the ED. The average length of stay for the ED was shortened by 122 minutes (31%). Moreover, NSTEMI patients were ruled in more quickly with a 41% reduction in their length of stay.