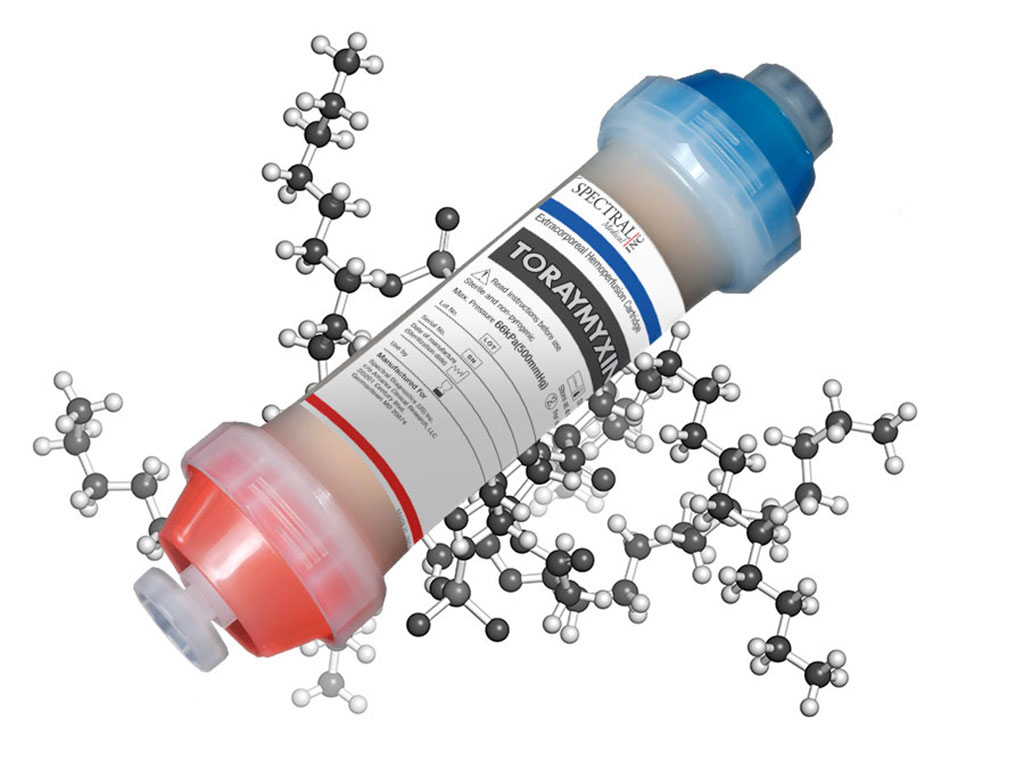 Image: PMX is indicated for patients with sepsis and endotoxemia or suspected gram negative infection (Photo courtesy of Spectral Medical)

Sepsis is a life threatening condition caused by the body’s response to bacterial products such as endotoxin. Sepsis is a challenging disease affecting millions worldwide, and if not recognized early and treated promptly, sepsis can lead to multiple organ failure, shock and death. Endotoxin, also referred to as Lipopolysaccharide (LPS), a component of the cell wall of Gram negative bacteria, is one of the main triggers of the pathogenesis of septic shock and multiple organ failure. Among the various strategies studied to eliminate endotoxin, Polymyxin-B hemoperfusion has been the most effective in blocking the toxic effects of endotoxin by virtue of its electrochemical affinity with Lipid A (common to all species of endotoxin). Now, a therapeutic hemoperfusion device guided by the only FDA-cleared diagnostic assay for the risk of developing sepsis removes endotoxin from the bloodstream.

Spectral Medical Inc.’s (Toronto, Canada) Toraymyxin (PMX) device removes endotoxin from the blood using the electrochemical properties of Polymyxin-B, while avoiding known side effects of its systemic administration. The PMX cartridge contains polystyrene composite woven fibre with Polymyxin-B immobilized on the surface through covalent bonding. The blood flows radially and uniformly through the fibers at a rate of 80-120 mL/min before exiting the cartridge. PMX selectively adsorbs circulating endotoxin, thereby helping to rebalance the innate immune system. Removal of endotoxin leads to a decrease in inflammatory mediator levels, as well as an improvement in vascular function and hemodynamics. The US Food & Drug Administration (FDA) has granted Breakthrough Device designation for the company’s PMX device.

Additionally, scientists at Spectral have incorporated the body’s natural mechanisms of endotoxin detection and adapted them into a system that provides an accurate endotoxin measurement within 30 minutes. The Endotoxin Activity Assay (EAA) test is a chemiluminescent bio-assay based on the oxidative burst reaction of activated neutrophils to complement coated LPS-IgM immune complexes. The IgM antibody, a key reagent, is specific for the Lipid A portion of endotoxin (LPS). In the presence of LPS, the ensuing oxidative burst results in light emission in the presence of luminol. Each EAA test relies on three reactions: the first reaction is a negative control which allows each patient to be their own control, the second is the test sample and the third is a maximum chemiluminescence calibrator with a high level of exogenous endotoxin. EAA is the only Health Canada licensed, FDA cleared, and CE marked rapid diagnostic for endotoxin activity in human whole blood.

“We are entering an era of personalized medicine for critical illnesses,” said Dr. John Kellum, Chief Medical Officer of Spectral. “By breaking up sepsis into subsets that have specific molecular pathogenesis, we believe our strategy targeting endotoxemic septic shock, characterized by high levels of endotoxin in the bloodstream, is far more likely to succeed, where other non-specific therapies have failed time and again. Our goal is to show a large difference in mortality when an anti-endotoxin therapy is applied to carefully selected patients with high endotoxin activity in their bloodstream. Moreover, we have a diagnostic test already in clinical use to identify these patients. We believe this combination of an advanced diagnostic with a specific therapy represents the future of sepsis care.”