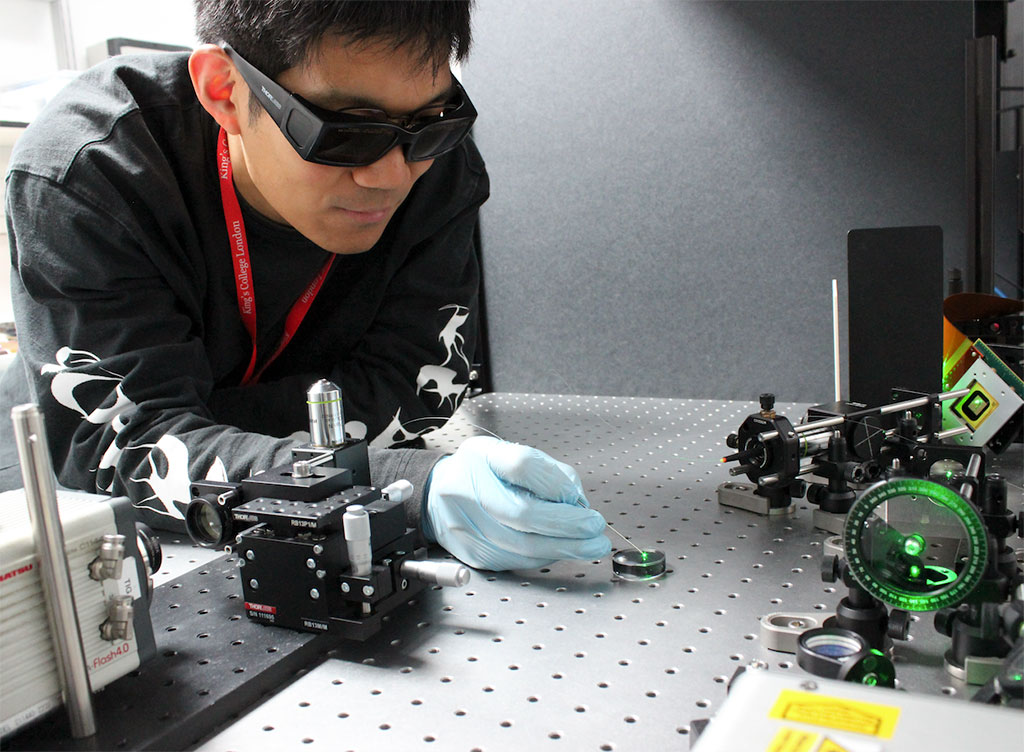 Photoacoustic imaging works by shining pulses of light onto absorbing structures in the body such as red blood cells or DNA. The structures then generate acoustic waves that can be detected by ultrasound sensors and used to form images that can resolve molecular, structural and functional information from below the tissue surface. By combining light and sound to create 3D images, photoacoustic imaging can provide important clinical information, but until now the instruments have been either too bulky or too slow for practical use as forward-viewing endoscopes. Now, researchers have created a photoacoustic imaging endoscope probe that can fit inside a medical needle with an inner diameter of just 0.6 millimeters.

The ultra-thin endoscope developed by researchers at King’s College London School of Biomedical Engineering & Imaging Sciences (London, UK) consists of two optical fibers each roughly the diameter of a human hair. Although fiber-based photoacoustic endoscopy probes have been developed, they usually require a bulky ultrasound detector or have a low imaging speed. In the new work, the researchers overcame both of these challenges by combining wavefront-based beam shaping with light-based ultrasound detection and a fast algorithm for controlling the device. This unique combination allowed them to create an extremely small probe without sacrificing imaging speed.

The new probe uses two thin optical fibers - one for delivering the pulsed light used to generate the photoacoustic waves and the other for ultrasound detection. For the excitation light, a high-speed digital micromirror device is used to scan a tightly focused light spot. This device has nearly one million tiny mirrors that can be independently flipped at tens of thousands of frames per second to change the wavefront of the light so that it can be focused and scanned quickly. For the ultrasound detection, the researchers developed an optical microresonator – a tiny structure made for confining light - that could be fabricated on the tip of an optical fiber. When sound waves hit the microresonator, its thickness changes, which, in turn, modifies the amount of light that is reflected back into the fiber, allowing optical detection of the acoustic waves.

To demonstrate the new device, the researchers used it to acquire high-resolution images of mouse red blood cells covering an area 100 microns in diameter. The researchers point out that imaging performance was not substantially degraded when the probe was scanned, suggesting that it isn’t affected by modest fiber bending. However, as a step toward clinical use, they will further investigate how complex fiber bending or semi-rigid configurations affect imaging performance. They also say that artificial intelligence could be used to increase the imaging speed.

“Traditional light-based endoscopes can only resolve tissue anatomical information on the surface and tend to have large footprints,” said Wenfeng Xia, leader of the research team from the King’s College London School of Biomedical Engineering & Imaging Sciences. “Our new thin endoscope can resolve subcellular-scale tissue structural and molecular information in 3D in real-time and is small enough to be integrated with interventional medical devices that would allow clinicians to characterize tissue during a procedure.”

“The imaging speed of this photoacoustic endomicroscopy probe is two orders of magnitude higher than those previously reported,” added Xia. “It could eventually allow 3D characterization of tissue during various minimally invasive procedures such as tumor biopsies. This could help clinicians pinpoint the right area to sample, which would increase the diagnosis accuracy.”