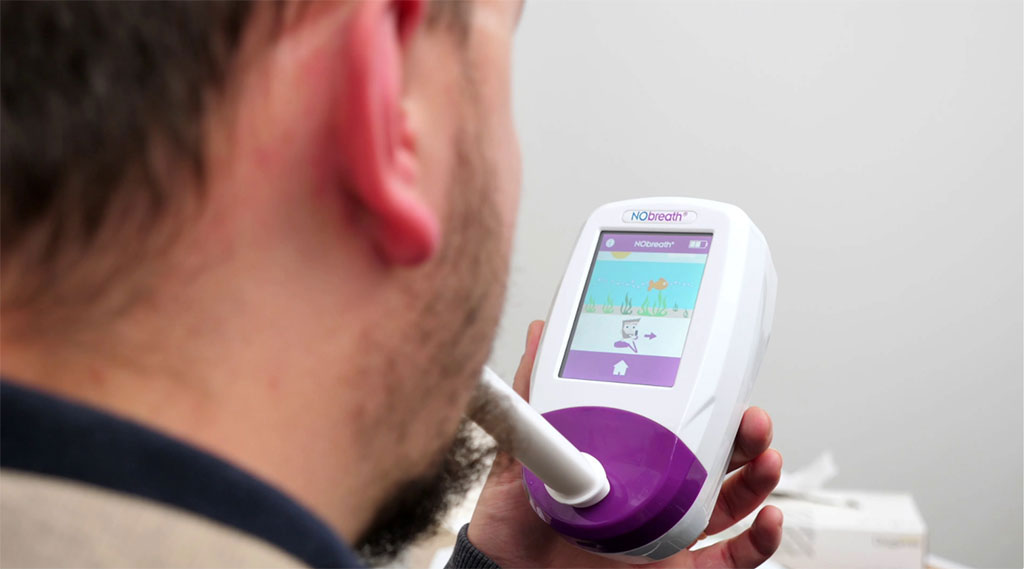 The Bedfont Scientific (Maidstone, United Kingdom) NObreath FeNO monitor is a handheld, non-invasive analysis system designed to measure FeNO in parts per billion (ppb) in exhaled breath. The device is based on an electrochemical sensor that reacts to the presence of nitric oxide producing an electrical output. To perform a test, a NObreathFlo adapter is inserted the device with a disposable mouthpiece. The NObreathFlo adapter includes an eye level flow indicator that makes keeping a constant flow during exhalation easy, even for young children.

The device is provided with a pack of 50 single-use mouthpieces that contain an integrated infection control filter that removes and traps over 99% of airborne bacteria, and over 96% of viruses from the patient's breath; these can be used up to three times per patient. After 50 tests, the NObreathFlo adapter also has to be replaced. Pre-configured adult and child profiles can be selected, with the results presented on a color touch screen, as well as ambient NO levels. Based on the results, clinicians can confirm medication efficacy, predict pending asthma attacks, and detect airway inflammation.

“COVID-19 is hard to diagnose and we know very little about it presently, however as an illness that effects your lungs and airways, we are testing employees each day, and any who have an increase in FeNO of over 15% will immediately be sent to self-isolate,” said Jason Smith, managing director of Bedfont Scientific. “As FeNO can be used to monitor inflammatory changes in the airway it could be an early indicator prior to physical symptoms enabling us to reduce the risk of spread.”

Nitric oxide (NO) is an important regulator of immune responses and is a product of inflammation in the airways that is over-produced in asthma. FeNO is predominantly used as a predictor of response to inhaled corticosteroids (ICSs), to monitor adherence, and as a diagnostic tool in ICS-naïve patients. It has also been shown to be a predictive factor for asthma exacerbations. In addition, higher levels of FeNO have been shown to be associated with a decline in lung function.