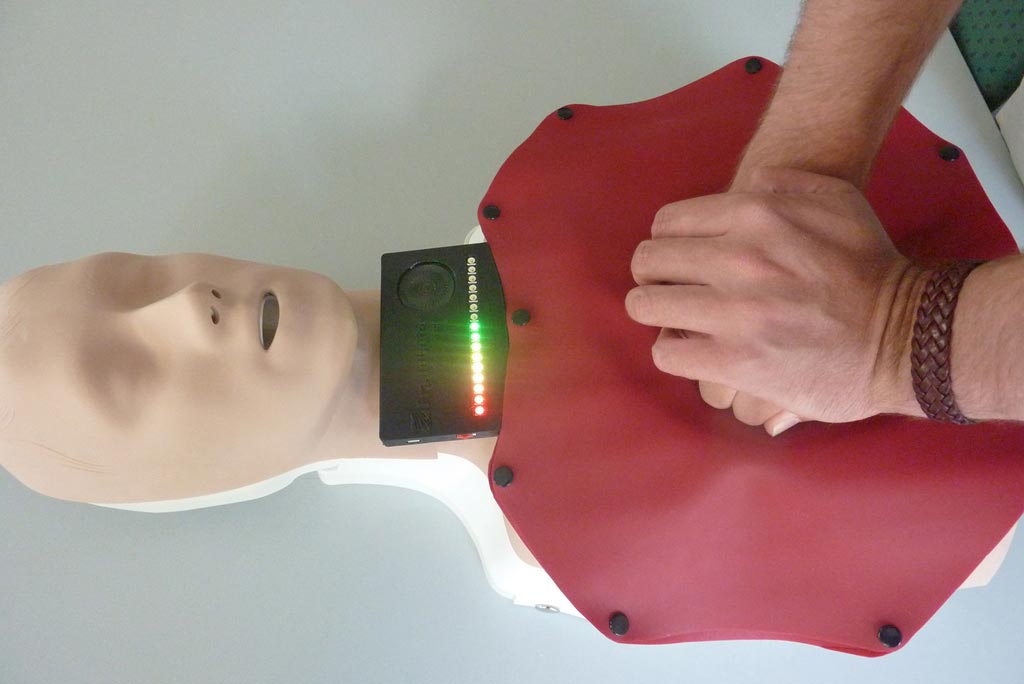 Developed by researchers at the Fraunhofer Institute for Silicate Research (ISC; Würzburg, Germany), and the University of Applied Sciences (Munich, Germany), the Rescue Aid resuscitation silicon mat incorporates deformation sensors (placed in a star pattern) that measure compression depth during cardiopulmonary resuscitation (CPR). The sensors are connected to an electronics system board at the upper edge of the mat, with light emitting diodes (LEDs) that indicate whether sufficient pressure is being applied – when sufficient, green LEDs light up. An array of red LEDs signals that the pressure is too much.

The mat, shaped to resemble the human torso and cover it during resuscitation, also eliminates direct bodily contact, reducing people’s inhibitions and easing their reluctance to intervene. An acoustic signal that serves as a metronome guides first responders by dictating the pace of the compressions; the tone generator is also housed in the electronics box. And because the sensors are made of a soft foil, they do not cause any injuries or cause pain in the palms of the hands of first responders during CPR.

“If performed correctly, chest compressions significantly improve the victim’s chances of survival. But people are scared of making a mistake, and as a result either do nothing or administer the chest compressions too gently to be effective,” said Holger Böse, PhD, scientific and technical manager of the ISC Smart Materials Center. “Rescue Aid is a way to simplify the resuscitation process. We could well imagine the Rescue Aid being a standard component of any first aid kit in the future.”

The 2010 American Heart Association (AHA) guidelines for hands-only CPR call for at least 100 chest compressions per minute for at least two minutes, at a depth of at least two inches in the center of the victim's chest.