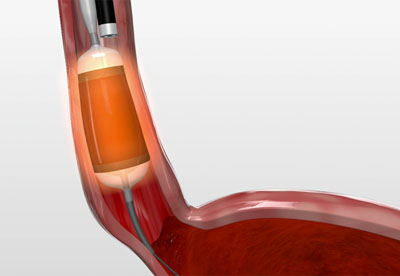 The Barrx 360 Express RFA balloon catheter uses a proprietary bipolar electrode array set in a soft, compliant balloon material to provide a 360-degree, three-centimeter long ablation zone that delivers precise circumferential RFA energy to the targeted BE tissue area. The procedure involves several steps: first, a soft sizing balloon is introduced to measure the diameter of the esophagus. The Barrx 360 RFA is then introduced over a guidewire, and the ablative energy is delivered, with the catheter moved distally to treat all targeted tissue. Focal catheters can be used for residual disease touch-up.

Components of the system include a proprietary RFA energy generator that automatically inflates to the appropriate size, based on the patient’s esophagus; sets the ablation parameters; and supplies energy to the soft sizing balloon and the RFA balloon catheter. The coagulum is removed from the ablation zone with a cleaning cap mounted on the endoscope. The Barrx 360 Express RFA is a product of Medtronic (Dublin, Ireland), and is available in five sizes, ranging from 18-31 mm.

“The biggest advantage of the Barrx 360 Express catheter is that it’s easier to use because of the larger, longer, and adjustable balloon size,” said Anthony Infantolino, MD, of Thomas Jefferson University Hospital (Philadelphia, PA, USA). “These new features provide for a reduction in surgery time and the number of catheters required during RFA procedures, allowing me to concentrate on increasing the quality of the procedure.”

BE refers to an abnormal change (metaplasia) in the cells of the lower portion of the esophagus, when the normal squamous epithelium lining of the esophagus is replaced by goblet cells, which are usually found lower in the GI tract. The medical significance of Barrett esophagus is its strong association with esophageal adenocarcinoma, a particularly lethal form of cancer.