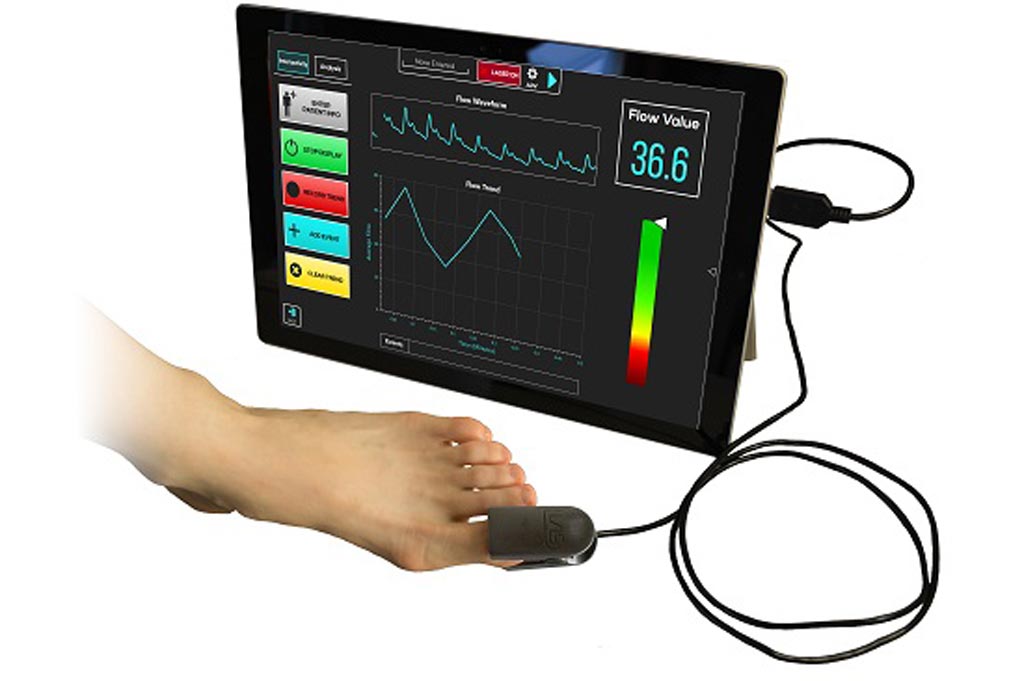 Image: The FlowMet-R system (Photo courtesy of LAS).
A new sensor that clips onto fingers or toes provides an improved method of detecting and measuring treatment efficacy in peripheral artery disease (PAD).

The Laser Associated Sciences (LAS; Irvine, CA, USA) FlowMet-R includes a small laser diode and a camera the size of a postage stamp that combine to measure blood flow in a digit in real time; the measurement reflects the severity of PAD vascular disease upstream of the digit. The device is based on laser speckle imaging, with the source and detector on opposite sides of one another in order to produce reduced motion artifact and reduced laser exposure to the eyes, allowing safer intra-procedural monitoring during peripheral vascular surgery.

In tests conducted on patients before, during, and after vascular disruption induced via brachial artery occlusion, FlowMet-R system measurements were found to be significantly correlated with benchmark laser Doppler, with no significant differences in the mean flow value measured among people of all skin colors. The difference in mean transmitted intensity between light-skinned (White/Caucasian) patients and any other group demonstrated that skin tone did not significantly decrease light source throughput.

“The FlowMet-R technology provides much-needed insight into to the efficacy of revascularization surgeries in real time. By directly measuring limb perfusion during surgeries, physicians can see for the first time whether peripheral blood flow in being improved,” said Sean White, CEO of LAS. “This reduces the ambiguity that clinicians currently face in knowing not only if an intervention is effective, but how effective it is. For that reason, the operating room is where we see the technology being adopted first, and we’re really excited to see that.”

PAD results when the peripheral arteries become too narrow or obstructed due to plaque and limit the blood flow to the legs. If left untreated, PAD can cause pain or aching in the legs, difficulty with walking, resting pain in the foot at night in bed, non-healing sores or infections in the toes or feet, and can ultimately lead to limb loss in its most severe form. In addition, it can be associated with other serious arterial conditions leading to heart attacks and stroke.