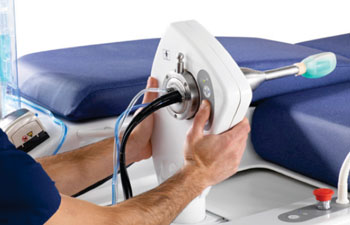 A new high-intensity focused ultrasound (HIFU) system offers an effective option for prostatic tissue ablation with a low occurrence of side effects.

The Ablatherm HIFU system is intended for treating patients with localized prostate cancer (stages T1-T2) who are not surgical candidates due to age or comorbidities, those who prefer an alternative option, or for patients who failed previous radiotherapy (RT) treatment. The system itself consists of a treatment module, a control module, and a probe with both treatment and imaging transducers. After a spinal epidural or general anesthetic (GA) is administered, the patient lies down on his right lateral decubitus and stays in this position throughout the treatment.

The Ablatherm HIFU probe is then introduced in the rectum, and the imaging transducer scans the prostate gland to plan robotic treatment. Once the ablation sequence is finalized, the treatment transducer emits HIFU ultrasound in the prostate gland; at the focal point—where the ultrasound waves are focused—the absorption of the ultrasound emission beam creates a sudden temperature increase, to around 85 °C, which destroys the tissue in the targeted zone. The Ablatherm HIFU system is a product of EDAP TMS (Vaulx-en-Velin, France), and has been approved by the US Food and Drug Administration (FDA).

“This clearance represents a unique opportunity for EDAP and its superior HIFU technology to penetrate the largest prostate market in the world in the same way it has emerged as the leading HIFU technology in Europe,” said Marc Oczachowski, CEO of EDAP TMS. “The pieces are in place to begin deploying Ablatherm devices in the US very quickly, and we look forward to bringing the technology to urologists as well as patients in need.”

HIFU technology is based on nonlinear acoustic mathematical optimization methods to analyze and simulate the propagation of sound in material. The information is then used to enhance the shape of an acoustic lens in such a way that that ultrasound pressure is focused precisely on the location of the tissue to be ablated, while the surrounding tissue retains as little damage as possible.