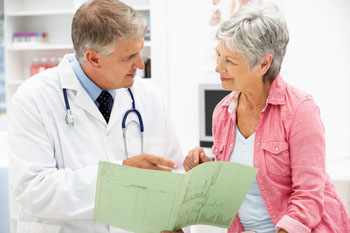 Image: A new study describes a novel index that quantifies net bone formation and resorption, which may help identify women that experience fast bone loss across the menopause transition (Photo courtesy of UCLA).
Developed by researchers at the University of California, Los Angeles (UCLA; USA), and the University of Tokyo (Japan), the Bone Balance Index (BBI) estimates the relationship between resorption (urinary N-telopeptide) and formation (osteocalcin) markers. To create the index, the researchers used data from a cohort of 685 women between the ages of 42 and 52 as they went through menopause. The women were either premenopausal or in early perimenopause when they enrolled in the study, and had their final menstrual period during the follow-up period.

The researchers then combined measurements of bone breakdown and bone formation in the BBI with bone mineral density data in the women’s lumbar spine--as measured annually--to determine net bone balance before their final period. The researchers found that the BBI index was a stronger predictor of bone loss from two years before the final menstrual period to three to four years later--a time when bone density typically declines--than a measurement of bone breakdown alone in the lumbar spine alone. The study was published on June 23, 2016, in the Journal of Clinical Endocrinology & Metabolism.

“Researchers have previously shown that it is difficult to predict an individual's bone loss by testing the blood or urine for proteins that reflect either bone breakdown or bone formation alone,” said lead author Albert Shieh, MD, of the UCLA division of endocrinology. “Since both bone breakdown and bone formation occur at the same time in the body, we created an index that accounts for both processes, and tested whether this new index can help predict bone loss.”

“This novel approach to assessing an individual's bone health may help identify which women are at risk of losing vertebral bone mineral density across the menopause transition,” concluded Dr. Shieh. “More studies are needed to test whether this index is useful for predicting bone loss after the menopause transition, and if it is useful for predicting fractures. Since markers of bone breakdown alone have limited utility in predicting bone loss at an individual level, better approaches are needed to ensure individuals at highest risk of rapid bone loss are identified as quickly as possible.”

Osteoporosis is defined as a bone density of 2.5 standard deviations below that of a young adult, as measured by dual-energy X-ray absorptiometry. It is the most common reason for a broken bone among the elderly, and may be due to a lower than normal peak bone mass and a greater than normal bone loss. It is more common in women than men, with 2-8% of males and 9-38% of females affected after menopause, usually due to lower levels of estrogen.