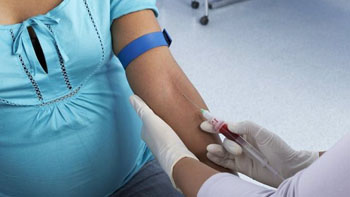 “Considering that our study took place in a relatively wealthy country, our results show that even in 2016 iron deficiency remains an important problem,” said lead author Kris Poppe, MD, head of the endocrine clinic at HUSP. “Women should be checked for iron deficiency during pregnancy, and ideally before too. Iron supplements should be given out to decrease a number of established pregnancy complications, but it needs to be proven whether they can decrease thyroid problems too.”

THS is a pituitary hormone that stimulates the thyroid gland to produce T4 to fuel the metabolism of almost every tissue in the body. Thyroid hormones are also important for the full development of a baby’s brain, which is especially critical during the first semester when the fetus has not yet developed a thyroid gland of its own. Iron, on the other hand, is important for the normal functioning of thyroid peroxidase (TPO), a protein essential for the correct functioning of the thyroid.