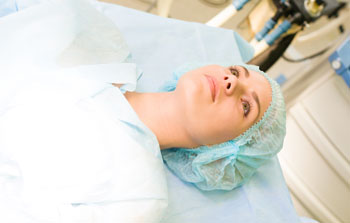 Image: A woman preparing for an appendectomy (Photo courtesy of Getty Images).
Women who have their appendix or tonsils removed have higher subsequent pregnancy rates and shorter time to pregnancy, according to a new study.

The results showed that pregnancy rates among women who removed their appendix (54.4%) or their tonsils (53.4%) were significantly higher than those of the rest of the population (43.7%). Women who had both their tonsils and appendixes removed were the most fertile (59.7%). The time it took to get pregnant was also shortest among those who had both an appendectomy and tonsillectomy. The study was published on July 6, 2016, in the Journal of Fertility and Sterility.

“This research is of paramount interest because appendectomy and tonsillectomy are very common surgical operations, experienced by tens of thousands of people in the UK alone,” said lead author Li Wei, PhD, of the UCL School of Pharmacy. “Although a biological cause is possible, we believe that the cause is more likely to be behavioral. We are pursuing both hypotheses with further research.”

“For many years medical students were taught that appendectomy had a negative effect on fertility and young women often feared that having their appendix removed threatened their chances of later becoming pregnant,” said Sami Shimi, MD, of the department of surgery at Ninewells hospital. “We have found that women who have had an appendectomy or tonsillectomy, or even more particularly both, are more likely to become pregnant, and sooner than the rest of the general population.”