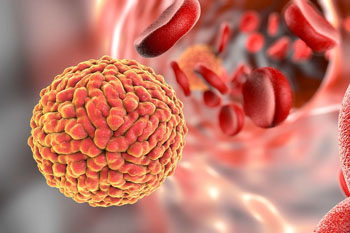 Image: An illustration of Zika virus in the blood (Photo courtesy of SPL).
A new study suggests that Zika virus infection during pregnancy may be related to a severe birth defect called arthrogryposis, wherein the joints are deformed.

Researchers at the Association for Assistance of Disabled Children (AACD; Recife, Brazil), the University of Pernambuco (UPE; Recife, Brazil), and other institutions in Brazil reported a retrospective case series study of seven children with arthrogryposis and a diagnosis of congenital infection (presumably caused by Zika virus) during the Brazilian microcephaly epidemic. The researchers described the clinical, radiological, and electromyographic features in the children, and examined the likely correlation between clinical and primary neurological abnormalities.

The results showed that brain images of all seven children were characteristic of congenital infection and arthrogryposis, with two of the children testing positive for IgM to Zika virus in the cerebrospinal fluid (CSF). Arthrogryposis was present in the arms and legs of six children (86%) and the legs of one child (14%). Hip radiographs showed bilateral dislocation in seven children, subluxation of the knee associated with genu valgus in three children (43%), which was bilateral in two (29%). All the children underwent high definition ultrasonography of the joints, and there was no evidence of abnormalities.

Five of the children also underwent brain computed tomography (CT) and magnetic resonance imaging (MRI), with the remaining two undergoing CT alone. All presented cortical development malformations and calcifications, predominantly in the cortex and subcortical white matter (especially in the junction between the cortex and white matter), reduction in brain volume, ventriculomegaly, and hypoplasia of the brainstem and cerebellum. MRI of the spine in four children showed apparent thinning of the cord and reduced ventral roots. The study was published on August 9, 2016, in BMJ.

“Congenital Zika syndrome should be added to the differential diagnosis of congenital infections and arthrogryposis. The arthrogryposis was unrelated to the abnormalities of the joints themselves, but was possibly of neurogenic origin, with chronic involvement of central and peripheral motor neurons leading to deformities as a result of fixed postures in utero,” concluded lead author pediatric neurologist Vanessa van der Linden, MD, of AACD, and colleagues. “Based on the neurophysiological observations, we suggest two possible mechanisms: tropism of neurons, with involvement of peripheral and central motor neurons, or a relation with vascular disorders.”

Zika virus is a member of the Flaviviridae family, of the genus Flavivirus, and is transmitted by daytime-active Aedes mosquitoes; in humans, the virus causes a mild illness known as Zika fever. Zika was first reported in Brazil in May 2015, and since then local health authorities estimate that around a million suspected cases have occurred. Brazilian health authorities also observed a significant increase in the number of detected cases of microcephaly and Guillain-Barré Syndrome affecting fetuses and newborns.