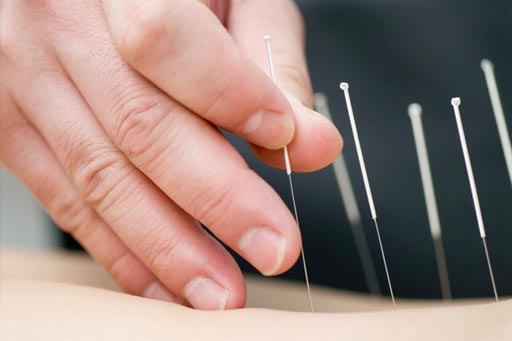 Image: New research shows acupuncture can reduce menstruation pain (Photo courtesy of Getty Images).
The intensity and duration of period pain (dysmenorrhea) can be reduced by up to 50% by administering manual acupuncture, according to a new study.

A manualized trial protocol was used to allow differentiation and individualized treatment over a period of three months. Twelve treatments were then performed over three menstrual cycles, either once per week (in the LF groups) or three times in the week prior to menses (in the HF groups). All of the study groups received treatment during the first 48 hours of menses. The primary outcome was the reduction in peak menstrual pain at 12 months from trial entry.

The results revealed that during the treatment period and nine-month follow-up, all groups showed statistically significant reductions in peak and average menstrual pain compared to baseline, but there were no differences between groups. Health related quality of life increased significantly in six domains in groups having HF of treatment, compared to two domains in LF groups. Manual acupuncture groups required less analgesic medication than electro-acupuncture groups. HF-MA was the most effective in reducing secondary menstrual symptoms compared to both EA groups. The study was published on July 12, 2017, in PLOS One.

“Pragmatic trials of acupuncture have shown a reduction in pain intensity and an improvement in quality of life in women with period pain, however evidence has been limited for how changing the 'dosage' of acupuncture might affect the outcome,” said lead author Mike Armour, MD, of the Institute of Complementary Medicine (NICM) at WSU. “Using manual stimulation of the needles, rather than an electrical pulse, resulted in reduced need for pain-relieving medication and improvement in secondary symptoms such as headaches and nausea.”

Acupuncture is an alternative medicine methodology originating in ancient China that treats patients by manipulating thin, solid needles that have been inserted into acupuncture points in the skin. According to traditional Chinese medicine (TCM), stimulating these points can correct imbalances in the flow of qi through channels known as meridians. Scientific research, however, has not found any histological or physiological correlates for qi, meridians and acupuncture points.