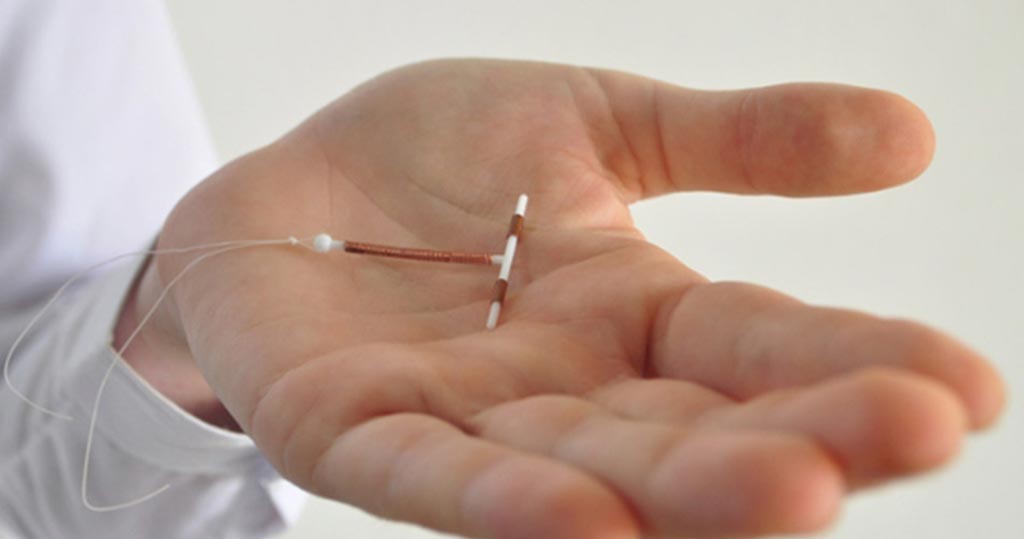 Image: A new study suggests hormonal IUDs do not affect breastfeeding (Photo courtesy of University of Utah).
A new study concludes that an immediate postpartum levonorgestrel intrauterine device (IUD) is an acceptable option for women planning to breastfeed.

Researchers at the University of New Mexico (UNM; Albuquerque, USA) and the University of Utah (Salt Lake City, USA) conducted a randomized study involving 259 women to examine if inserting an IUD immediately after birth affects breastfeeding. For the study, participants were allocated to either an immediate postpartum insertion group (132 women), or to a delayed insertion group (127 women). Exclusion criteria included delivery prior to 37 weeks gestational age, chorioamnionitis, postpartum hemorrhage, and medical complications of pregnancy that could affect breastfeeding.

Time to lactogenesis in the immediate group was a mean 65.3 hours, compared to that of the delayed group, at 63.6 hours, indicating a mean difference of 1.7 hours. The researchers reported that the only disadvantage to early IUD placement was an increased potential for the device to be dislodged. Women who had IUDs placed immediately after birth had a higher rate of losing the IUD (19%) than those who received it later (2%). No IUD perforations occurred in either group. The study was published on August 21, 2017, in the American Journal of Obstetrics and Gynecology.

“Bottom line, early placement of a hormonal IUD is a safe, long-term birth control method that doesn't negatively affect women who want to breastfeed their baby,” said lead author David Turok, MD, of the department of obstetrics and gynecology at the University of Utah. “Prenatal care is an ideal time for health care providers to speak to women about long-term birth control, as well as immediately after delivery because it is clear they are not pregnant and many are highly motivated to start contraception.”

“This study shows no difference in breastfeeding outcomes [for women in either group], which is critically important in reassuring women and advocates that a hormonal IUD empowers women to avoid unintended pregnancy and to successfully breastfeed their infants,” said senior author Eve Espey, MD, of the chair of the department of obstetrics and gynecology at UNM School of Medicine. “We hope this study contributes to improving access to this highly safe and effective long-term contraceptive method.”

An IUD (also known as a coil) is a small, often T-shaped birth control device inserted into a woman's uterus to prevent pregnancy. They have been in use from the 1800s. IUDs are one of the favored forms of long-acting reversible birth control, as once removed (even after long-term use), fertility returns to normal rapidly. Failure rates are about 0.8% with copper devices and 0.2% with levonorgestrel hormonal devices in the first year of use.