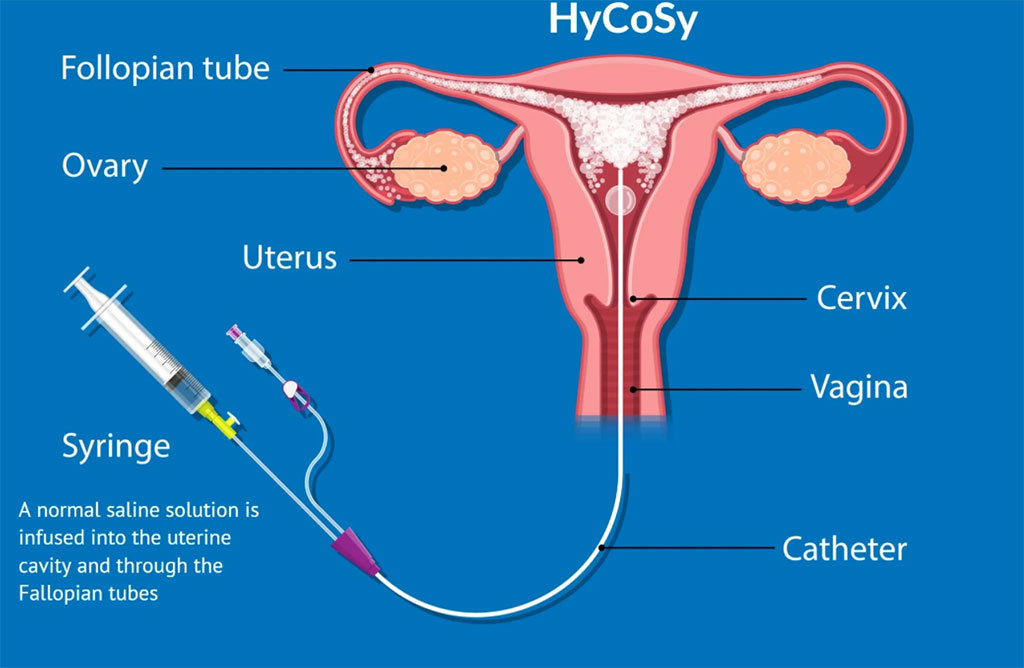 Image: Schematic explanation of the HyCoSy technique (Photo courtesy of Shutterstock)
Hysterosalpingo contrast sonography (HyCoSy) is potentially safer and more efficient for examination of fallopian tubes than hysterosalpingography (HSG), according to a new study.

Researchers at Albert Einstein Medical Center (Philadelphia, PA, USA) conducted a single-center, retrospective study of 28 female patients (average age 32 years) between December 2018 and April 2020. Of these, 17 women had a normal HyCoSy exam, and were therefore not recommended to undergo subsequent hysterosalpingography (HSG). Another four patients had an abnormal HyCoSy, but they did not undergo an HSG within four weeks; however, another seven patients underwent both examinations.

The results showed that out of the 13 fallopian tubes examined, nine were obstructed, with one false positive and three true negatives. When compared to HSG, HyCoSy showed a sensitivity of 100%, a specificity of 75%, positive predictive value of 90%, a negative predictive value of 100%, and an accuracy of 92.3%. The study was presented at the virtual annual meeting of the American Roentgen Ray Society (ARRS), held during April 2021.

“HyCoSy with a microbubble contrast shows promise and may obviate the need for HSG, particularly in straightforward cases. In a majority of cases not studied with HSG, free spill was obvious and imaging was straightforward, so HSG was not considered necessary,” said lead author and study presenter Shuchi Rodgers, PhD. “Most importantly, we were able to immediately follow pelvic ultrasound and sonohysterography on the same day, as opposed to HSG, which often occurs on a different day.”

HyCoSyis an ultrasound technique developed to assess whether the fallopian tubes are open or blocked by injecting a fluid/bubble mix containing normal saline mixed with air, or ExEm foam gel. HSG is a similar procedure, but it uses x-ray fluoroscopy to examine the uterus and fallopian tubes. First carried out in 1917, the procedure is also used to investigate miscarriages resulting from abnormalities within the uterus and to determine the presence and severity of tumor masses, adhesions, and uterine fibroids.