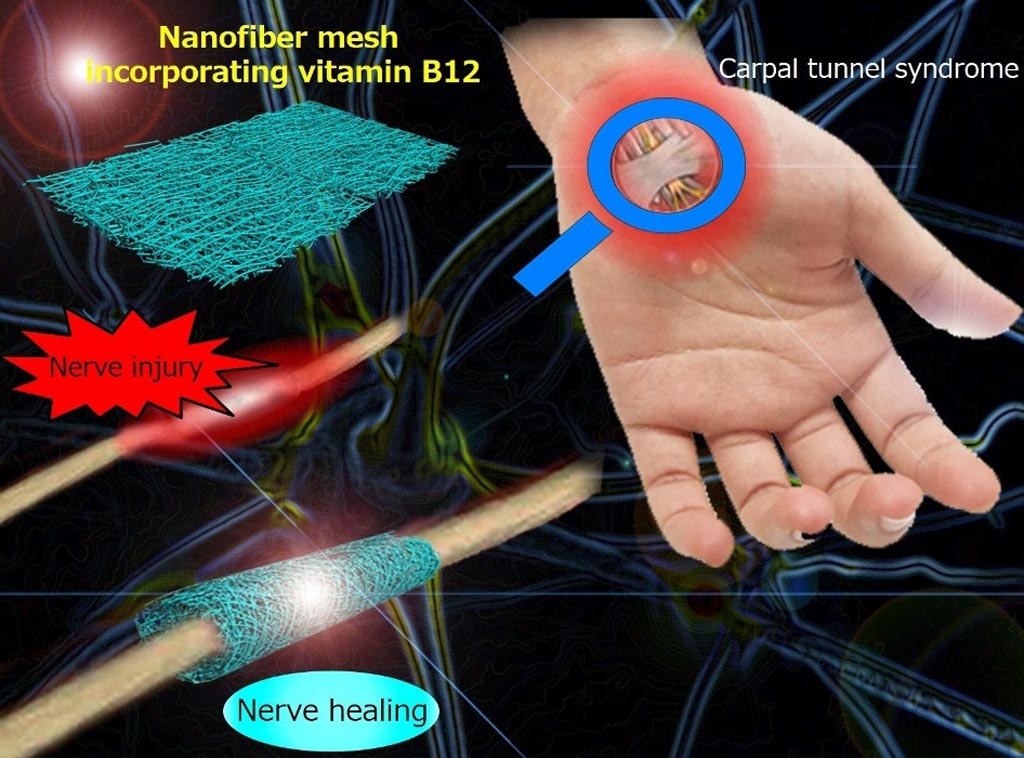 Image: A novel mesh infused with Vitamin B12 aids nerve regeneration (Photo courtesy of Osaka University).
A novel mesh that incorporates vitamin B12 can be wrapped around injured peripheral nerves to facilitate their regeneration and restore function, according to a new study.

Developed by researchers at Osaka University and the Japanese National Institute for Materials Science, the electrospun nanofiber sheet is made of very fine biodegradable fibers (several hundred nanometers in diameter) which incorporate methylcobalamin (MeCbl), an active vitamin B12 homologue. When wrapped around peripheral nerve injury sites, the MeCbl in the mesh is gradually released for at least eight weeks, in order to facilitate nerve regeneration and restoration of their function.

In an test involving injured sciatic nerves in rats, there were no adverse effects of the nanofiber sheets on function of the peripheral nervous system. On the contrary, the local implantation of the nanofiber sheets contributed to the recovery of the motor and sensory function, the recovery of nerve conduction velocity, and the promotion of myelination, and without affecting the plasma concentration of MeCbl. The researchers are now examining clinical applications of the mesh to treat peripheral nerve disorders such as carpal tunnel syndrome (CTS). The study was published early online in the April 2017 issue of Acta Biomaterialia.

B12 is the largest and most structurally complicated vitamin known, with a key role in the functioning of the brain and the nervous system, the formation of red blood cells, cell metabolism, DNA synthesis, and fatty acid and amino acid metabolism. As humans are incapable of producing vitamin B12, they must rely on animal products and supplements. Vitamin B12 has been known to facilitate nerve regeneration, but oral administration of it has not proven to be very effective, and no devices capable of delivering vitamin B12 directly to affected sites had been available.