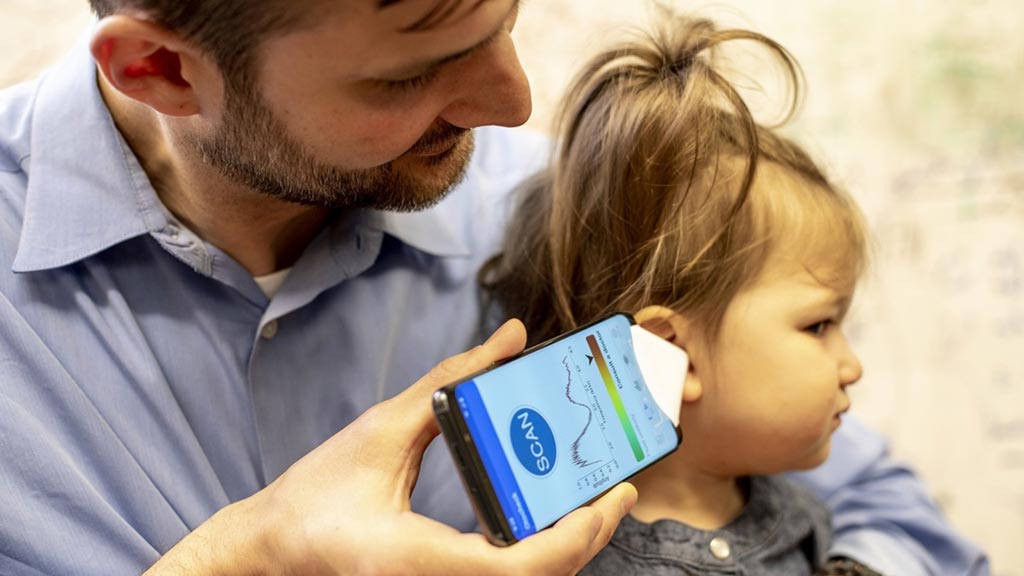 Image: Dr. Randall Bly of Seattle Children\'s Hospital checking his daughter\'s ear (Photo courtesy of Dennis Wise/ UW).
A novel application detects middle ear fluids using the speaker of a smartphone to emit sound and the microphone to analyze its echo from the eardrum.

Developed at the University of Washington (UW; Seattle, USA) and Seattle Children’s Hospital and Research Institute (WA, USA), the app is designed to assess eardrum mobility by directing a continuous 150-millisecond soundwave into the ear using a paper funnel that rests on the outer ear. The funnel guides sound waves in and out of the ear canal to measure how they bounce off the eardrum. The sound, which resembles a bird chirping, is picked up by the smartphone's microphone along with the original chirps; the interference between the two sounds is modulated by the presence of fluid in the middle ear.

In a proof-of-concept study involving 98 pediatric patient ears, the smartphone system outperformed a commercial acoustic reflectometry system, detecting middle ear infections with a probability of 85%. In another study, the researchers tested the algorithm on 15 ears belonging to younger children between nine and 18 months of age. It correctly classified all five ears that were positive for fluid and nine out of the 10 ears (90%) that did not have fluid in them. The system can be easily operated by parents without formal medical training. The study was published on May 15, 2019, in Science Translational Medicine.

“Designing an accurate screening tool on something as ubiquitous as a smartphone can be game changing for parents as well as health care providers in resource limited regions,” said study co-author Shyam Gollakota, PhD, an associate professor in the UW School of Computer Science & Engineering. “A key advantage of our technology is that it does not require any additional hardware, other than a piece of paper and a software app running on the smartphone.”

“Fluid behind the eardrum is so common in children that there's a direct need for an accessible and accurate screening tool that can be used at home or clinical settings,” said study co-lead author Sharat Raju, MD, a resident in otolaryngology-head and neck surgery at the UW School of Medicine. “If parents could use a piece of hardware they already have to do a quick physical exam that can say ‘your child most likely doesn't have ear fluid’ or ‘your child likely has ear fluid, you should make an appointment with your pediatrician,’ that would be huge.”

Otitis media with effusion (OME) is characterized by a nonpurulent fluid effusion of the middle ear that may be either mucoid or serous. Symptoms usually involve hearing loss or aural fullness but typically do not involve pain or fever. In children, hearing loss is generally mild and is often detected only with an audiogram. In general, inpatient care for OME is not required unless complications that threaten the stability of the patient's condition are suspected.