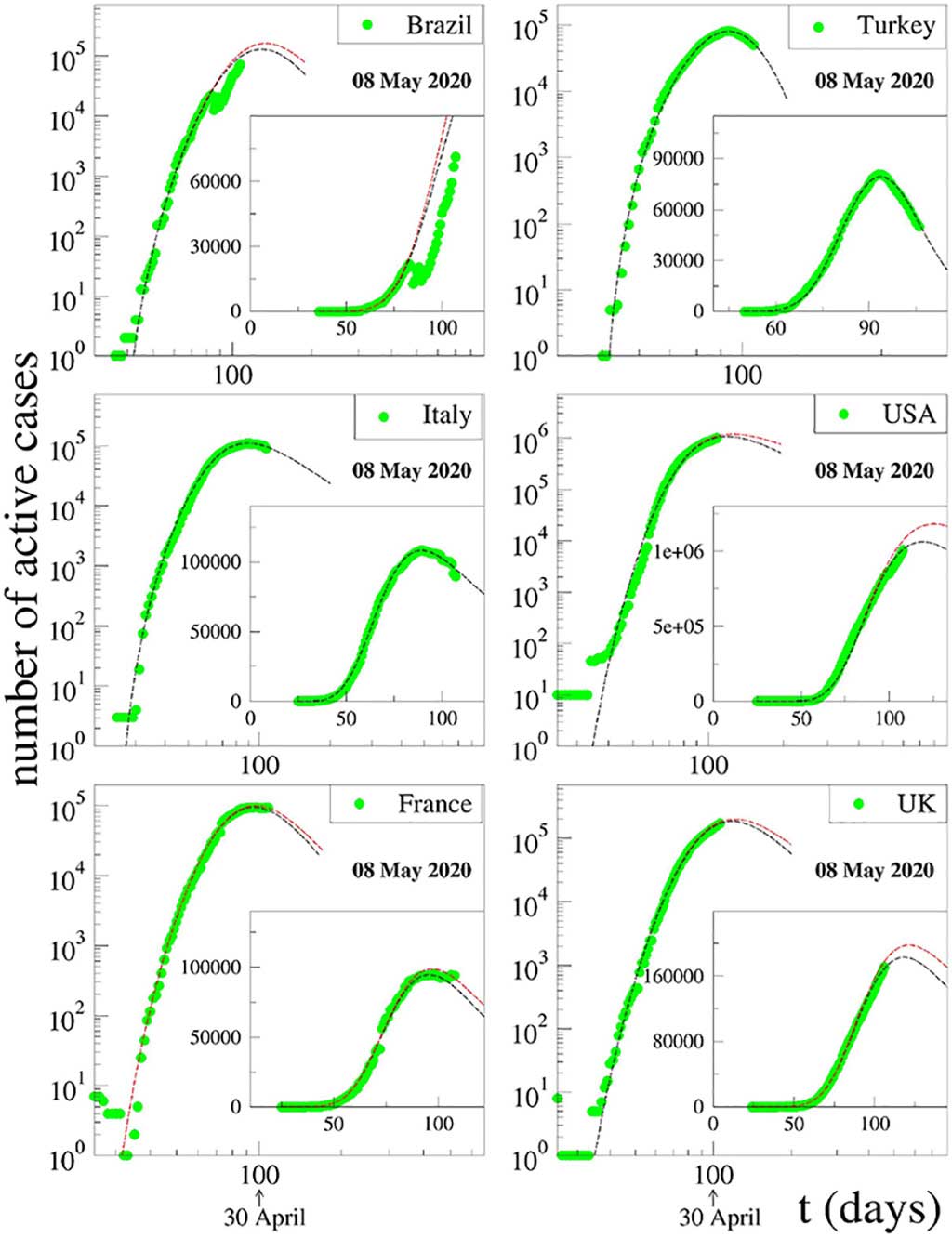 Image: Data for active cases in severely affected countries with Equation (Photo courtesy of Frontiers)
A new study shows how a unique set of functions and probability distributions can predict forthcoming peaks in the spread of COVID-19.

Developed by researchers at Santa Fe Institute (NM, USA), Ege University (Bornova, Turkey), and other institutions, the tool is based on a q-statistical functional form that accurately describes all existing available data on active cases and deaths in most countries around the world, and can also predict forthcoming peaks satisfactorily. Using data from China, where the active case rate seems to have peaked, they first set the main parameters for the formula. Next, they applied it to other countries, including France, Brazil, and the United Kingdom, and found that it matched the evolution of the active cases and fatality rates over time.

The tool was developed following analysis of the active cases and deaths per day--based on inspection of public data--and the time evolution of the number of active cases, which showed a rather intriguing similarity with the distributions of volumes of stocks on Wall Street. The researchers claim it lies in the realm of complex systems, which includes not only high-frequency financial transactions, but also other fields, such anthropological issues, q-Weibull distribution-like systems, and biotech intercorporate networks. The study was published on May 29, 2020, in Frontiers in Physics.

“The present prediction algorithm could, in principle, be included within an internet app, which could access the data publicly available at a given website and automatically update the predicted dates and heights of the disease peaks of epidemics, such as the present Covid-19 one,” concluded study authors Constantino Tsallis, PhD, of Santa Fe Institute, and Ugur Tirnakli, PhD, of Ege University. “The functional form seems to be universal. Not just for this virus, but for the next one that might appear as well.”

The original financial graph appeared in a 2004 volume co-edited by Dr. Tsallis and the late 1969 Nobel Prize in Physics Murray Gell-Mann. Dr. Tsallis went on to develop developed q-statitics, also known as "Tsallis statistics" in the late 1980s, as a generalization of Boltzmann-Gibbs statistics to complex systems.