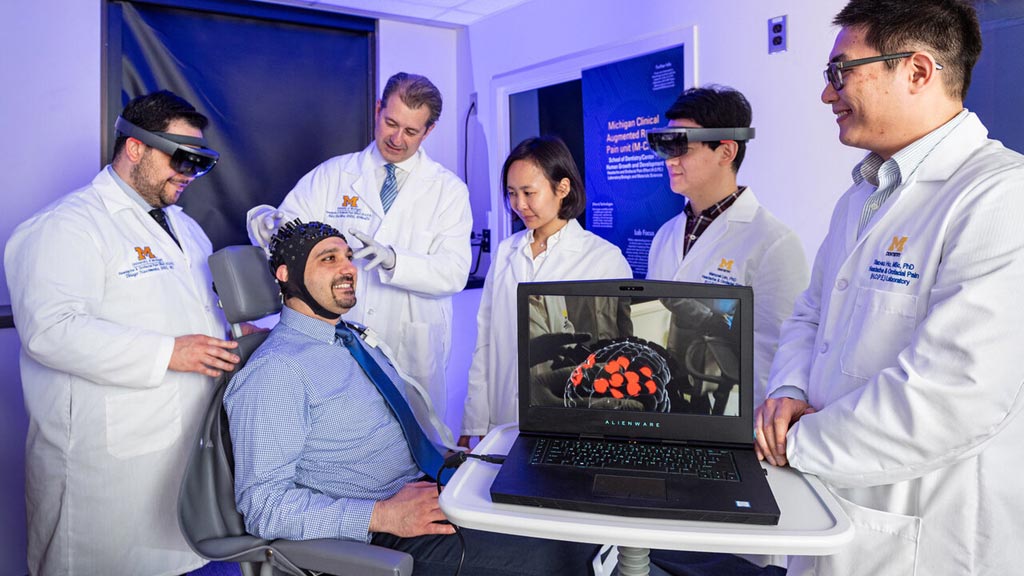 Developed at the University of Michigan (U-M; Ann Arbor, USA), the portable clinical augmented reality and artificial intelligence (CLARAi) is based on a sensor-outfitted cap that detects changes to blood flow and oxygenation using functional near-infrared (nIR) spectroscopy. The data is decoded using a neural network (NN) algorithm to classify the hemodynamic response data into color-coded pain and no-pain brain states. At the same time, clinicians wear a Microsoft HoloLens AR glasses, which allows them to view brain activity in real time on a reconstructed brain template, while the subjects sit in a clinical chair.

To test the device, the researchers triggered pain by administering cold to the teeth of 21 volunteer dental patients. They tested the performance of 7 layer, 6 layer, 5 layer, 3 layer, and recurrent NN, as well as a long short-term memory network, on pain diction and localization in a simulated real-time environment. Red and blue dots were used to denote location and level of brain activity, and this "pain signature" was mirror-displayed on the HoloLens AR screen, in order to gauge the cortical activity during evoked acute clinical pain. They found that 3-layer NN achieved optimal classification accuracy (80.37%) for pain discrimination. The study was published on May 12, 2019, in the Journal of Medical Internet Research.

“It's years away from widespread use in a clinical setting, but the feasibility study is a good first step for dental patients,” said senior author Alex DaSilva, DDS, of the U-M School of Dentistry, and director of the Headache and Orofacial Pain Effort Lab. “It's very hard for us to measure and express our pain, including its expectation and associated anxiety. Right now, we have a one to 10 rating system, but that's far from a reliable and objective pain measurement.”