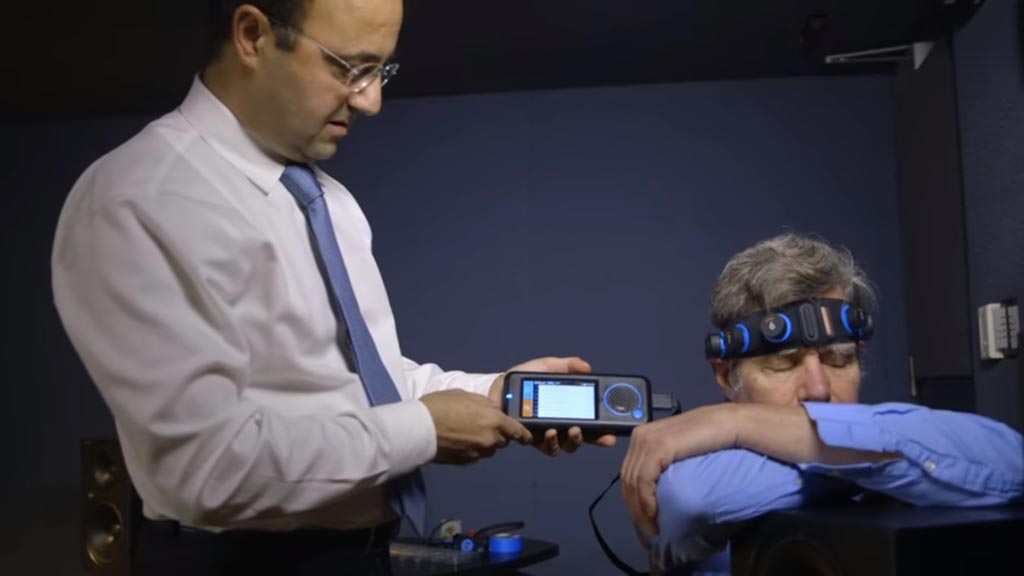 Image: Professor Josef Parvizi listening to a sonified EEG (Photo courtesy of Stanford University).
A new study confirms that sonification of electroencephalograms (EEGs) can aid rapid assessment of patients with suspected subclinical seizures, even by laymen.

Researchers at Stanford University School of Medicine (CA, USA) have developed a novel method to interpret EEG data by converting the wave signal into sound in real time. The technique involves modulation of the underlying electrophysiological signal into a voice tone that is in the audible range. To test the new method, the researchers conducted a study involving 34 medical students and 30 nurses, all without any prior EEG training, who listened to a 15-second sonified EEG and then attempted to determine if it represents seizure or nonseizure conditions.

The researchers selected 84 EEG samples, of which seven represent seizures, 25 represented seizure-like activity, and 52 represented normal nonperiodic, nonrhythmic activity. Single channels EEGs from the left and right hemispheres were then converted to sound files. After a four-minute training video, study participants were asked to designate each audio sample as seizure or nonseizure. Their performance was then compared to that of 12 EEG-trained neurologists and 29 medical students who diagnosed the same EEGs on a visual display.

The results revealed that the non-experts listening to single-channel sonified EEGs detected seizures with a higher sensitivity (students, 98%; nurses, 95%) than experts or nonexperts reviewing the same EEGs on the visual display (neurologists, 88%; students, 76%). In addition, if the EEGs contained seizures or seizure-like activity, the nonexperts listening to the sonified EEGs rated them as such with high specificity (students, 85%; nurses, 82%), close to that of experts or nonexperts viewing the EEGs visually (neurologists, 90%; students, 65%). The study was published on March 20, 2018, in Epilepsia.

“You might think that all seizures must cause some sort of convulsions, namely a patient who's having a seizure must fall down and shake on the ground. But that's actually not the case, especially in critically ill patients in the intensive care units; close to 90% of those patients will have silent seizures,” said lead author Professor Josef Parvizi, MD, PhD, of the department of neurology. “This technology will enable nurses, medical students, and physicians themselves to actually assess their patient right there, and they will be able to determine if the patient is having silent seizures.”

The traditional approach to interpreting EEGs requires physicians with formal training to visually assess the waveforms. This approach can be less practical in critical settings where a trained EEG specialist is not readily available to review the EEG and diagnose ongoing subclinical seizures, such as nonconvulsive status epilepticus. By converting brain waves into sound, even non-specialists can detect silent seizures -- epileptic seizures without the convulsions commonly expected.