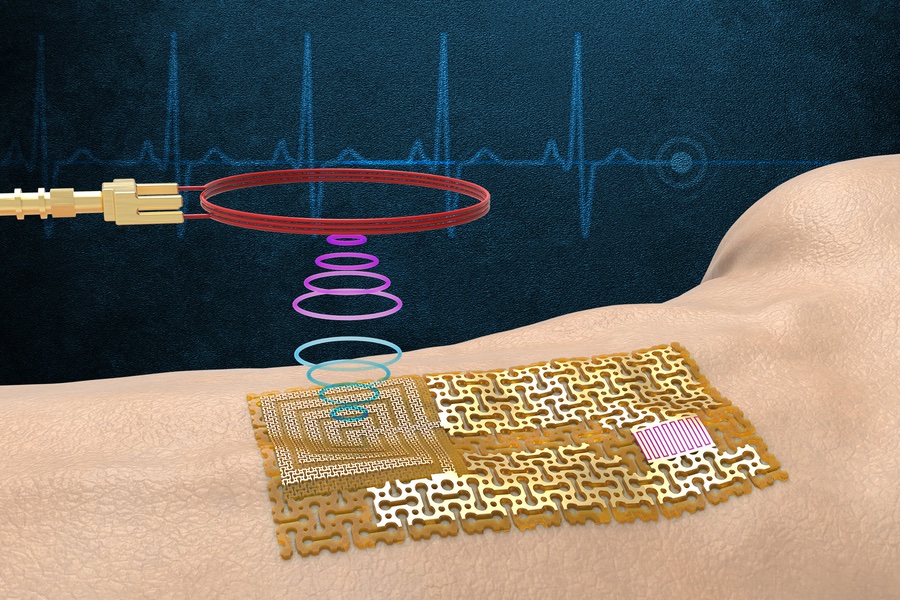 Wearable sensors are ubiquitous thanks to wireless technology that enables a person’s glucose concentrations, blood pressure, heart rate, and activity levels to be transmitted seamlessly from sensor to smartphone for further analysis. Most wireless sensors today communicate via embedded Bluetooth chips that are themselves powered by small batteries. But these conventional chips and power sources will likely be too bulky for next-generation sensors, which are taking on smaller, thinner, more flexible forms. Now, engineers have devised a new kind of wearable sensor that communicates wirelessly without requiring onboard chips or batteries, opening a path toward chip-free wireless sensors.

The sensor designed by engineers at Massachusetts Institute of Technology (MIT, Cambridge, MA, USA) is a form of electronic skin, or “e-skin” - a flexible, semiconducting film that conforms to the skin like electronic Scotch tape. The heart of the sensor is an ultrathin, high-quality film of gallium nitride, a material that is known for its piezoelectric properties, meaning that it can both produce an electrical signal in response to mechanical strain and mechanically vibrate in response to an electrical impulse. The researchers found they could harness gallium nitride’s two-way piezoelectric properties and use the material simultaneously for both sensing and wireless communication.

In their new study, the team produced pure, single-crystalline samples of gallium nitride, which they paired with a conducting layer of gold to boost any incoming or outgoing electrical signal. They placed the new e-skin on volunteers’ wrists and necks, and used a simple antenna, held nearby, to wirelessly register the device’s frequency without physically contacting the sensor itself. The device was able to sense and wirelessly transmit changes in the surface acoustic waves of the gallium nitride on volunteers’ skin related to their heart rate.

The team also paired the device with a thin ion-sensing membrane - a material that selectively attracts a target ion, and in this case, sodium. With this enhancement, the device could sense and wireless transmit changing sodium levels as a volunteer held onto a heat pad and began to sweat. The researchers see their results as a first step toward chip-free wireless sensors, and they envision that the current device could be paired with other selective membranes to monitor other vital biomarkers.

“Chips require a lot of power, but our device could make a system very light without having any chips that are power-hungry,” says the study’s corresponding author, Jeehwan Kim, an associate professor of mechanical engineering and of materials science and engineering, and a principal investigator in the Research Laboratory of Electronics. “You could put it on your body like a bandage, and paired with a wireless reader on your cellphone, you could wirelessly monitor your pulse, sweat, and other biological signals.”