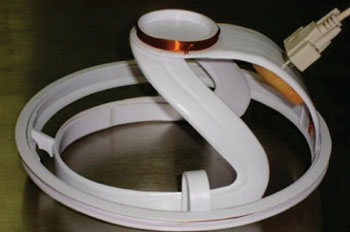 The Cerebrotech Intracranial Fluids Monitor (ICP) is a real-time volumetric integral phase shift (VIPS) spectroscopy monitor that consists of a headband with multiple integrated antennas that broadcast and receive each other’s signals; the frequency response of the phase angle between a transmitter and receiver antenna represents changes in the electrical properties of tissue resulting from small changes in intracranial fluid flow. A computer algorithm analyzes the changes in the tissue electrical properties, providing a visual readout on a real-time monitor.

The device detects characteristic changes in tissue composition and structure in traumatic brain injury (TBI). Thus, for brain edemas, swelling results from an increase in fluid in the tissue. For brain hematomas, internal bleeding causes blood buildup in certain regions of the brain. In the frequency range of 153–166 MHz, the device can distinguish between brain edema and a hematoma by the changes in electromagnetic tissue properties. The Cerebrotech ICP is a product of Cerebrotech (Pleasanton, CA, USA), and has received the European Community CE marking of approval.

“It has been remarkable to watch this powerful technology unfold, and to see it realizing the potential that we were only imagining just a few years ago,” said Wade Smith, PhD, MD, director of neurovascular services at UCSF medical center (San Francisco, CA, USA), and chairman of the Cerebrotech scientific advisory board. “Cerebrotech’s monitor can give us valuable insight into the progression of edema and bleeding in our patients, and help us manage their care as they recover from stroke and brain trauma.”

“This technology is inexpensive, it can be used in economically disadvantaged parts of the world and in rural areas that lack industrial infrastructure, and it may substantially reduce the cost and change the paradigm of medical diagnostics,” said Prof, Cesar Gonzalez, MD, of Instituto Politécnico Nacional (NPI; Mexico City, Mexico), who developed the technology. “This suggests the potential for the device to be used as an indication for the health of the brain in older patients in a similar way in which measurements of blood pressure, ECG, cholesterol or other health markers are used for diagnostic of human health conditions.”