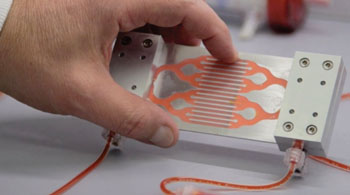 The biospleen device, developed by researchers at Harvard University (Boston, MA, USA), is a microfluidic filter that consists of two adjacent hollow channels connected to each other by a series of slits: one channel contains flowing blood, and the other contains a saline solution. The key to the device are tiny nanometer-sized magnetic beads coated with a genetically engineered hybrid version of a natural immune system protein called opsonin-mannose-binding lectin (MBL).

The researchers attached the hybrid proteins to magnetic beads (128 nanometers in diameter) that could be added to blood of an infected patient to bind to the pathogens and toxins, without having to first identify the type of infectious agent. A magnet then pulls the pathogen-coated magnetic beads through the channels to cleanse the blood flowing through the device, which is returned to the patient. The researchers decided to first test the system in vitro, using human blood spiked with pathogens.

They found that the device efficiently removed multiple Gram-negative bacteria, Gram-positive bacteria, fungi, and endotoxins from whole human blood flowing through a single biospleen unit at up to 1.25 liters/hour; in principal, many devices could be linked together to cleanse human blood at dialysis-like rates. They also tested the device using rats infected with E. coli, S. aureus, and toxins. Similar to the tests on human blood, and after just five hours of filtering, about 90% of the bacteria and toxin were removed from the rats' bloodstream. The study describing the biospleen device was published on September 14, 2104, in Nature Medicine.

“Sepsis is a major medical threat, which is increasing because of antibiotic resistance. We're excited by the biospleen because it potentially provides a way to treat patients quickly without having to wait days to identify the source of infection, and it works equally well with antibiotic-resistant organisms,” said senior author Prof. Donald Ingber, MD, PhD, founding director of the Harvard Wyss Institute for Biologically Inspired Engineering. “We hope to move this towards human testing to advancing to large animal studies as quickly as possible.”

Sepsis, which causes millions of deaths globally each year, is characterized by an inflammatory state resulting from the immune system's response to a serious infection triggered by bacteria, fungi, viruses, and parasites in the blood, urinary tract, lungs, skin, or other tissues. Common symptoms of sepsis include those related to a specific infection, but are usually accompanied by high fevers, hot, flushed skin, elevated heart rate, hyperventilation, altered mental status, swelling, and low blood pressure.