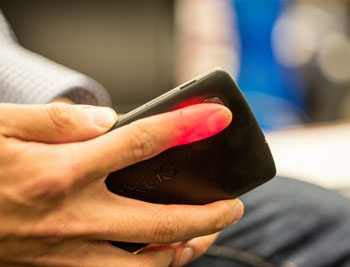 The HemaApp smartphone application, under development at the University of Washington (UW; Seattle, USA), shines light through a patient’s finger at different wavelengths, as well as infrared (IR) energy, to create a series of videos. By analyzing color absorption and reflectance across the different wavelengths, it detects concentrations of hemoglobin and other blood components, such as plasma. Processing algorithms also use pulse to distinguish between the properties of the patient’s blood and the physical characteristics of the finger.

The researchers tested the app under three different scenarios: using the smartphone camera’s flash alone, in combination with a common incandescent light bulb providing ambient light, and with a low-cost light emitting diode (LED) lighting attachment. The additional illumination sources are used to take advantage of properties found in other wavelengths of the electromagnetic spectrum that present useful absorption properties, but that are not currently found on all smartphone cameras.

In the initial trials, the correlation between HemaApp and the patient’s hemoglobin count on a complete blood count (CBC) test using the smartphone camera alone was 69%, with a common incandescent light bulb the correlation was 74%, and when used with the LED attachment, the correlation was 82%. For comparison, the Masimo (Irvine, CA, USA) Pronto showed a correlation of 81% to the CBC. The study was presented at the International Joint Conference on Pervasive and Ubiquitous Computing (UbiComp), held during September 2016 in Heidelberg (Germany).

“New phones are beginning to have more advanced infrared and multi-color LED capabilities; but what we found is that even if your phone doesn’t have all that, you can put your finger near an external light source like a common light bulb and boost the accuracy rates,” said senior author Professor Shwetak Patel, PhD, of the department of computer science & engineering and electrical engineering. “We’re just starting to scratch the surface here. There’s a lot that we want to tackle in using phones for non-invasively screening disease.”