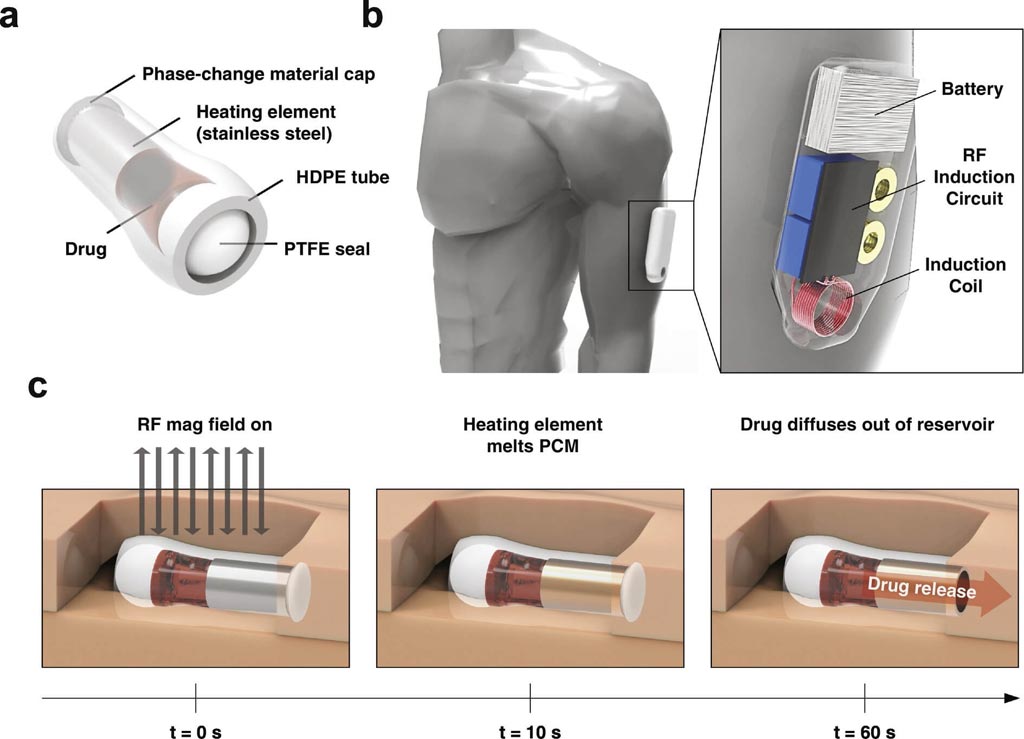 Developed at Purdue University (Lafayette, IN, USA), the Wearable Opioid Antidote Device is comprised of an adhesive sensor on the chest that measures respiration and heart rate and extracts the heart rate, a micro controller in an armband that receives the signal from the monitor patch, and a subcutaneously placed delivery device that is activated using an externally applied time varying magnetic field. Once an overdose-induced respiratory failure is detected, the device is activated, triggering an alternating magnetic field that generates heat to melt the capsule and release the drug.

A bench-top evaluation showed that the device can release 1.9 mg of powdered drug within 60 seconds, and up to 8.8 mm during a ten minute session. According to the researchers, the device can stabilize a user within 10 seconds, giving those who overdose alone, or who are left incapacitated, enough time to receive medical attention. The researchers also plan to build a communications system into the device that would automatically alert emergency services when the patient has overdosed. The study was published in the July 2019 issue of the Journal of Controlled Release.

“The idea is to be able to measure the rate of respiration using a wearable sensor and then be able to use that as a threshold to trigger the release of the antidote that's going to be implanted underneath the skin,” said senior author biomedical engineer Hyowon Lee, PhD. “The antidote is always going to be with you. The device wouldn't require you to recognize that you're having an overdose or to inject yourself with naloxone, keeping you stable long enough for emergency services to arrive.”

Naloxone is used to counter the effects of opioid overdose, for example heroin or morphine, and is specifically used to counteract life-threatening depression of the central nervous system (CNS) and respiratory system. It has been used for more than 40 years for reversal of respiratory depression due to opioid overdose, but has been primarily used by emergency medical services in injection form.