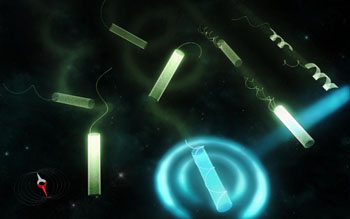 Under development at Ecole Polytechnique Fédérale de Lausanne (EPFL; Switzerland) and ETH Zurich (Switzerland), the biologically inspired microrobots were designed to mimic the parasitic protozoan trypanosomes, which causes African trypanosomiasis, also known as sleeping sickness. Trypanosomes uses a flagellum for propulsion, but hides it away once inside a person’s bloodstream as a survival mechanism. The prototype microrobot robot also has a bacterium-like flagellum that enables it to swim.

Unlike conventional robots, the microrobots are soft, flexible, and motor-less, made of a biocompatible hydrogel and magnetic nanoparticles. They are controlled via an integrated manipulation platform that can remotely control their mobility with electromagnetic fields, and can cause them to shape-shift when heat is applied, unfolding to their pre-determined shape. Once the final shape is achieved, the magnetic nanoparticles make them move and swim when an electromagnetic field is applied. The microrobots can then complete their mission, delivering drugs or performing precision tasks such as clearing clogged-up arteries.

Once the mission is completed, they can be heated with a laser, resulting in the flagellum wrapping around the body. To build a microrobot, the nanoparticles are placed inside layers of a biocompatible hydrogel. An electromagnetic field is then applied to orientate the nanoparticles in different parts of the construct, followed by a polymerization step to solidify the hydrogel. It is then placed in water, folding in specific ways depending on the orientation of the nanoparticles inside the gel to form the final overall 3D form. The study was published on July 22, 2016, in Nature Communications.

“Both a bacterium’s body and its flagellum play an important role in its movement. Our new production method lets us test an array of shapes and combinations to obtain the best motion capability for a given task,” said study co-author Mahmut Selman Sakar, PhD, of EPFL. “Our research also provides valuable insight into how bacteria move inside the human body and adapt to changes in their microenvironment.”