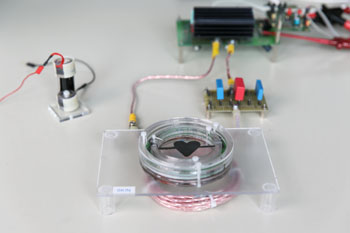 Developed by researchers at Ecole Polytechnique Fédérale de Lausanne (EPFL; Switzerland), the miniature pump is made of three tiny rings placed around the aorta at the exact spot where it exits the left ventricle. The rings are made of a dielectric electro active polymer (DEAP) with special electrical properties. Each ring has two electrodes that are drawn together by an electrostatic force whenever the electric pulse, provided by magnetic induction, is activated.

Each of the three rings contracts in sequence, in a movement reminiscent of an earthworm. The series of contractions, called peristalsis, creates a wave that moves the blood inside the artery. The double action, both vertical and horizontal, occurs simultaneously and immediately, creating a back-and-forth movement that can be controlled in real time. And since the pump ring does not come into direct contact with the blood, it avoids problems of hemolysis and the subsequent need for regular blood transfusions to replenish the damaged red blood cells (RBCs).

“This method does not require us to enter the heart; this means it is significantly less invasive than other cardiac support systems, which work by implanting valves or screw pumps inside the ventricle,” said Yves Perriard, director of the EPFL Integrated Actuators Laboratory (LAI). “The absence of valves and other components used in current methods to provide cardiac support doesn’t just lessen the possibility of hemolysis. It also makes the insertion and removal of the device significantly easier for surgeons.

The DEAP peristaltic pump is currently in prototype stage. The researchers plan to improve the device’s performance before testing it on a liquid with similar fluidic properties to those of the blood, such as glycerol. The researchers are also in contact with the University Hospital of Bern (Switzerland), where clinical trials could be conducted.