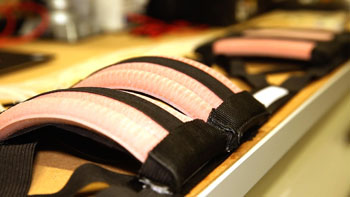 Under development at Ecole Polytechnique Fédérale de Lausanne (EPFL; Switzerland), the actuator prototypes include both linear and bending actuators with varying geometric parameters that can be used in diverse soft robotic systems for a wide set of assistive wearable technologies, including replicating the motion of several parts of the human body. The soft robots are made of elastomers such as silicon and rubber, and are controlled by changing air pressure in specially designed compartments, or modules, which also serve as the robot’s body.

The cucumber-shaped actuators can stretch up to around five or six times their normal length and bend in two directions, depending on the model. The soft robots are designed for use on the human body, with potential implementations including a wide variety of bioinspired and biomimetic systems, such as devices to assist gripping and manipulation of fragile objects. For example, one of the designs is a belt made of several inflatable components, which holds patients upright during rehabilitation exercises and guides their movements. A study describing the soft robotics was published on September 27, 2016, in Nature - Scientific Reports.

“Our robot designs focus largely on safety. There’s very little risk of getting hurt if you're wearing an exoskeleton made up of soft materials, for example,” said Professor Jamie Paik, PhD, director of the EPFL Reconfigurable Robotics Lab (RRL). “Using soft actuators, we can come up with robots of various shapes that can move around in diverse environments. They are made of inexpensive materials, and so they could easily be produced on a large scale. This will open new doors in the field of robotics.”

“We conducted numerous simulations and developed a model for predicting how the actuators deform as a function of their shape, thickness, and the materials they’re made of,” said lead author Gunjan Agarwal, PhD. “Elastomer structures are highly resilient but difficult to control. We need to be able to predict how, and in which direction, they deform. And because these soft robots are easy to produce but difficult to model, our step-by-step design tools are now available online for roboticists and students.”