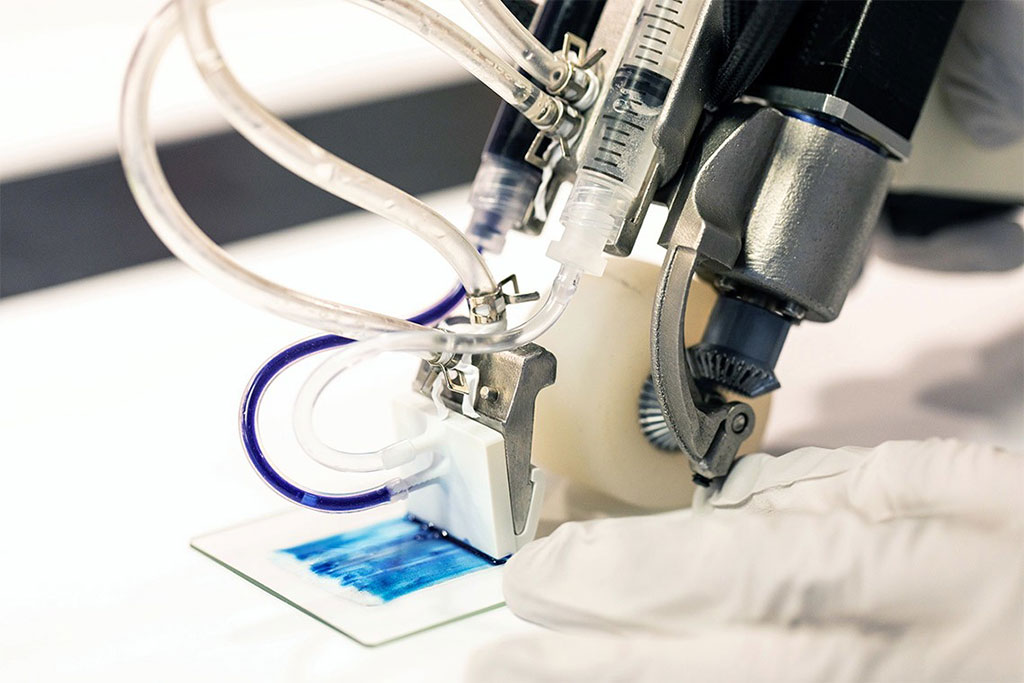 Under development at the University of Toronto (UT; Canada) and Sunnybrook Research Institute (Sunnybrook; Toronto, Canada), the current prototype of the hand-held device includes a microfluidic print-head that forms tissue in situ, depositing and setting the MSCs in place in two minutes or less. A soft wheel follows the track of the print-head, allowing better control for wider wounds. To ensure sterilization, the print-head is disposable.

In porcine pre-clinical models of a full-thickness burn, the researchers successfully delivered MSCs and stromal cell-containing fibrin sheets directly to the wound bed, improving re-epithelialization, dermal cell repopulation, and neovascularization. The researchers also demonstrated conformal delivery to surfaces that were inclined up to 45°, indicating that the 3D printer could be introduced in a clinical setting to improve dermal and epidermal regeneration. The study was published on February 4, 2020, in Biofabrication.

“Full-thickness burns are characterized by the destruction of both the outermost and innermost layers of the skin; these burns often cover a significant portion of the body. With big burns, you don’t have sufficient healthy skin available,” said co-senior author Marc Jeschke, MD, director of the Sunnybrook Ross Tilley Burn Centre. “Once it’s used in an operating room, I think this printer will be a game changer in saving lives. With a device like this, it could change the entirety of how we practice burn and trauma care.”

A full-thickness burn (also known as third- and fourth degree burns) occurs when both the epidermis and dermis are destroyed and the burn extends down into the subcutaneous tissue, including fat, muscles and even bones. For full-thickness burns, generally the skin will either be white, black, brown, charred, or leathery in appearance. Often eschar--dry, black, necrotic tissue--will form around the wound. Since nerve endings are destroyed along with the dermis, these wounds are typically painless. Another contributing factor to burn severity is its extension.