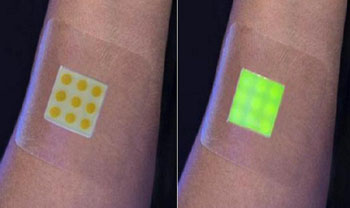 Image: The prototype of the ‘smart’ wound dressing: not infected (L), infected (R) (Photo courtesy of the University of Bath).
An intelligent hydrogel wound dressing glows green when it detects the presence of harmful bacteria in wound biofilms, potentially reducing the use of antibiotics.

Developed by researchers at the University of Bath (United Kingdom), the University of Brighton (United Kingdom), and other institutions, the prototype wound dressing combines tiny vesicles containing a fluorescent dye mixed with agarose, which are then dispersed within a hydrogel matrix. When toxic bacteria come in contact with the vesicles within the hydrated agarose film, a reaction occurs that releases a dye that fluoresces, alerting attending healthcare professionals that the wound is infected.

The researchers tested the dressing in both static and dynamic models of wound biofilms, using clinical strains of Escherichia coli, Pseudomonas aeruginosa, Staphylococcus aureus, and Enterococcus faecalis, which were used to establish a biofilm on a nanoporous polycarbonate membrane for periods of 24, 48, and 72 hours. The results indicated a clear fluorescent response within four hours, which was only observed when in contact with biofilms produced by a pathogenic strain. Similar responses were demonstrated on an ex-vivo porcine skin model of burn wound infection.

The sensitivity of the dressing to biofilms was dependent on the species and strain types of the bacterial pathogens involved, but a relatively higher response was observed in strains considered good biofilm formers. The researchers also found a clear difference in the levels of response when the dressings were tested on bacteria grown in biofilm or in planktonic cultures, suggesting that the level of expression of virulence factors is different depending of the growth mode. The study describing to prototype dressing was published in the February 2016 issue of ACS Applied Materials & Interfaces.

“The nanocapsules mimic skin cells in that they only break open when toxic bacteria are present; they aren’t affected by the harmless bacteria that normally live on healthy skin,” said senior author biophysical chemist Toby Jenkins, PhD, of the University of Brighton. “Using this dressing will allow clinicians to quickly identify infections without removing it, meaning that patients can be diagnosed and treated faster. It could really help to save lives.”