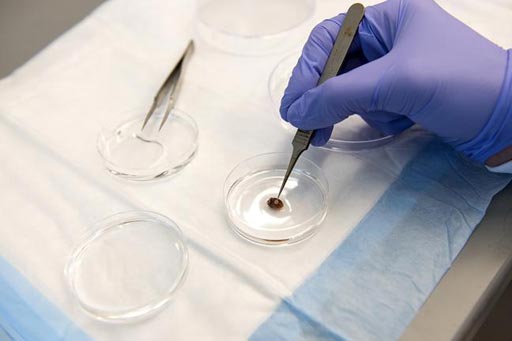 Developed by researchers at the University of Minnesota, the University of Alabama, and the University of Wisconsin, the human-induced cardiac muscle patch (hCMP) is an extracellular matrix (ECM) scaffold with submicron resolution manufactured using a multiphoton-excited (MPE) 3D printer. The patch is seeded with 50,000 cardiomyocytes, smooth muscle cells, and endothelial cells in a 2:1:1 ratio, derived from human-induced pluripotent stem cells.

In a murine model, the hCMP-seeded ECM scaffold began generating calcium transients and beating synchronously within one day of seeding; speed of contraction and relaxation, and peak amplitudes of the calcium transients increased significantly over the next seven days. In mice with surgically induced MI, measurements of cardiac function, infarct size, apoptosis, vascular and arteriole density, and cell proliferation one month after treatment were significantly better in mice treated with the hCMPs than in those treated with cell-free scaffolds. The study was published on April 14, 2017, in Circulation Research.

“The digital model is made into a physical structure by 3D printing with proteins native to the heart and further integrating cardiac cell types derived from stem cells. Only with 3D printing of this type can we achieve one micron resolution, needed to mimic structures of native heart tissue,” said senior author associate professor of biomedical engineering Brenda Ogle, PhD, of UMN. “We were quite surprised by how well it worked, given the complexity of the heart. We were encouraged to see that the cells had aligned in the scaffold and showed a continuous wave of electrical signal that moved across the patch.”

Printers that use single-photon excitation coupled to a sequence of photomasks can achieve around 30-μm resolution. The more advanced technique, MPE photochemistry, can restrict excitation in 3D via a method analogous to multiphoton laser scanning microscopy. A resolution of less than one μm can be determined by the MPE point spread function, and can thus approximate the size of components of native ECM. The technique can also be combined with rapid prototyping and computer-aided design to fabricate essentially any 3D structure.