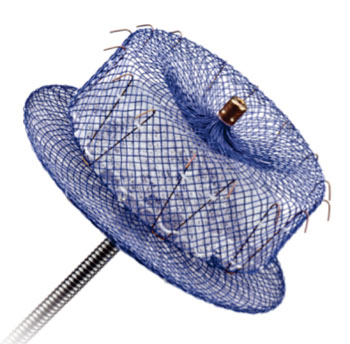 The eligible patients received the Amplatzer Cardiac Plug (ACP), a self-expanding, braided Nitinol mesh that works by blocking the LAA at its opening, minimizing the opportunity for blood clots to form or migrate into the bloodstream. The device, a product of St. Jude Medical (SJM; St. Paul, MN, USA), is offered in eight sizes to accommodate varying anatomies, and is preloaded into the delivery catheter, which simplifies device preparation and ultimately streamlines the entire procedure for the physician.

The results showed that when compared with the expected annual stroke risk of 5.62% a year, patients who underwent an ACP implant had a stroke risk of 2.30%, a decrease of 59%. Bleeding reduction decreased from an expected annual rate of 5.34% to an actual rate of 2.08%, for a 61% reduction. Major bleeding in patients with previous intracranial hemorrhage who underwent the ACP procedure was 0.7%, versus an estimated bleeding rate of 6.4%, an 89% reduction. The study was presented at the Transcatheter Cardiovascular Therapeutics (TCT) annual meeting, held during October 2015 in San Francisco (CA, USA).

“Compared with historical risks, patients had a 75% reduction of stroke or transient ischemic attacks and a remarkably low frequency of major bleeding at 0.7% when they had appendage closure with the Amplatzer Cardiac Plug,” concluded lead author and study presenter Apostolos Tzikas, MD, PhD, of AHEPA, and colleagues. “Further studies are required to confirm these initial positive results from the ACP Registry.”

The LAA is a tube-shaped appendage connected to the left atrium that can potentially hold static blood during an episode of AF, increasing the likelihood of clot formation; research shows that in AF patients, approximately 90% of all cardiac blood clots form in the LAA. If a clot forms in the LAA and is then released into the heart, it may enter blood circulation, travel to the brain, block a vessel and cause an ischemic stroke.