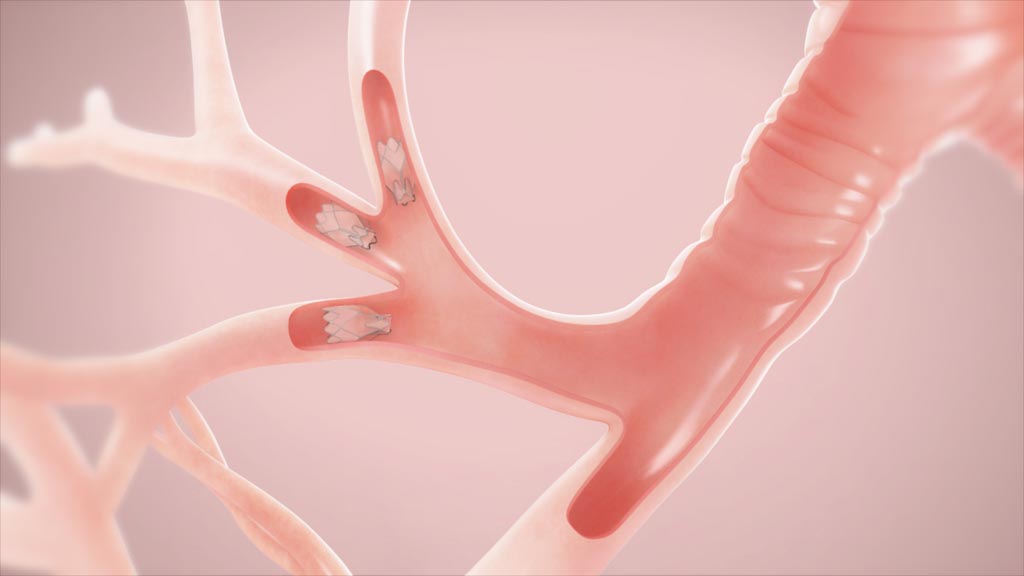 Researchers at Temple University (Philadelphia, PA, USA), University Medical Center Groningen (UMCG, The Netherlands), and other institutions conducted a study in 190 patients with severe heterogeneous emphysema and little to no collateral ventilation to evaluate the effectiveness and safety of the PulmonX (Redwood City, CA, USA) Zephyr EBV as compared to standard medical management of hyperinflation related to emphysema, which includes lung-volume-reduction surgery (LVRS), bullectomy, and lung transplantation.

In all, 128 patients were randomized to EBV, with a median of four valves placed, mostly in the left upper lung lobe. At 12-month follow-up, hyperinflation was reduced to a significantly greater extent in the EBV group, with 47.7% of EBV patients presenting a 15% or higher increase in post-bronchodilator forced expiratory volume (FEV1), versus 16.8% of those under standard medical care. They also had significant improvement in six-minute walk distance (6MWD) and respiratory questionnaire scores. The study was published on May 22, 2018, in the American Journal of Respiratory and Critical Care Medicine.

“Zephyr Valves offer clinically meaningful improvements in three important areas for patients - the ability to breathe better, be more active, and enjoy an improved quality of life,” said lead author Professor Gerard Criner, MD, of Temple University. “All primary and secondary endpoints were met, with Zephyr Valve treatment showing significant improvement for patients across multiple measures of breathing and quality of life. The Zephyr Valve also demonstrated an acceptable safety profile given the magnitude of benefit seen in this study.”

The Zephyr EBV is a one-way valve that blocks airflow to diseased regions of the lung, allowing healthy regions to expand and function more efficiently. The valves, which are either 4 or 5.5 millimeters in size, are implanted in a minimally invasive procedure using a bronchoscope equipped with a video camera. During the 60-minute procedure, 3-5 Zephyr valves are placed in airways leading to the diseased region of the lung. Once deployed, the self-expanding, one-way valve conforms to the bronchial wall and forms an airtight seal, blocking airflow to the diseased regions.