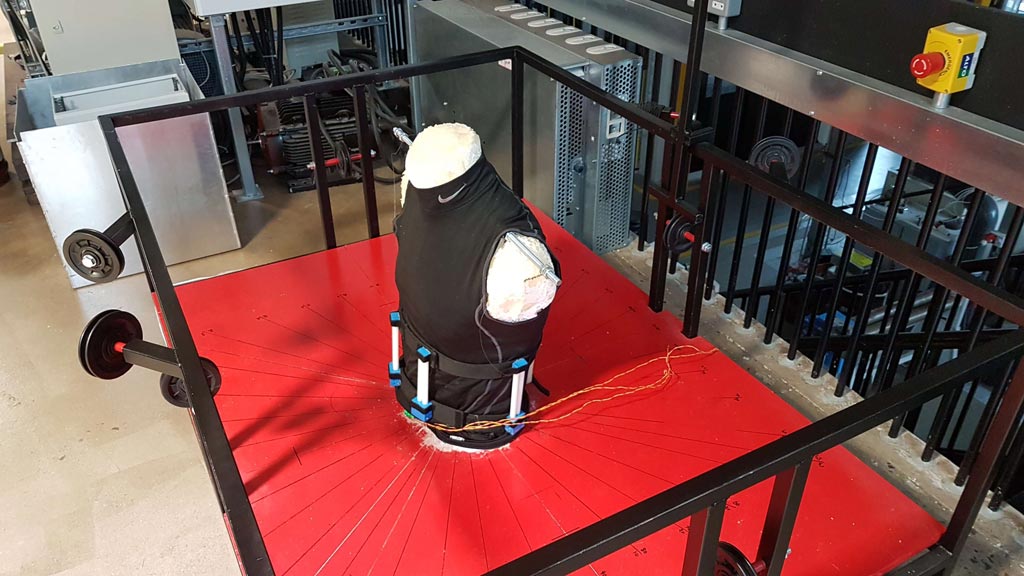 Image: A mechanical torso aids back brace design (Photo courtesy of Lancaster University).
A simulator that mimics the mechanical behavior of the human torso allows researchers to test different back brace designs and configurations without needing to test them on people.

Developed at Lancaster University (United Kingdom), the simulator is composed of a male torso-shaped mechanical test rig and a three-dimensionally (3D) printed spine and rib cage, which was created using modified computer aided design (CAD) models derived from CT scans of a human spine. The test rig allows for different spine configurations and deformities, such as scoliosis, to be modeled and tested with different back braces, all without causing discomfort to human testers, thus removing significant logistical and ethical issues.

With geometries that resemble human tissues, and with the aid of computer simulation physiological models, researchers can collect important data on the reduction of flexion, extension, lateral bending, and torsion for each back brace design examined. The researchers have already tested the rig with two novel back brace designs, one an existing medical back brace and the other a weightlifting belt. The study describing the development and testing process was published on July 30, 2019, in Computer Methods in Biomechanics and Biomedical Engineering.

“Back braces have been used as both medical and retail products for decades, however existing designs can often be found to be heavy, overly rigid, indiscrete, and uncomfortable,” said senior author engineer David Cheneler, PhD. “Our simulator enables new back braces to be developed that are optimized to constrain particular motions but allowing for other movements. It could also help with the design of braces and supports with targeted restriction of movement, which would be beneficial to some conditions and helping to reduce the risk of muscle-loss.”

Back braces are designed to limit spine motion in cases of fracture or in post-operative fusions, as well as a preventative measure against some progressive conditions. The two most common back braces include rigid braces that restrict motion by as much as 50%; and soft, elastic braces that limit forward motion of the spine and support it during occasions of stress (such as lifting of heavy loads) or post-operatively to assist in setting spinal fusions.