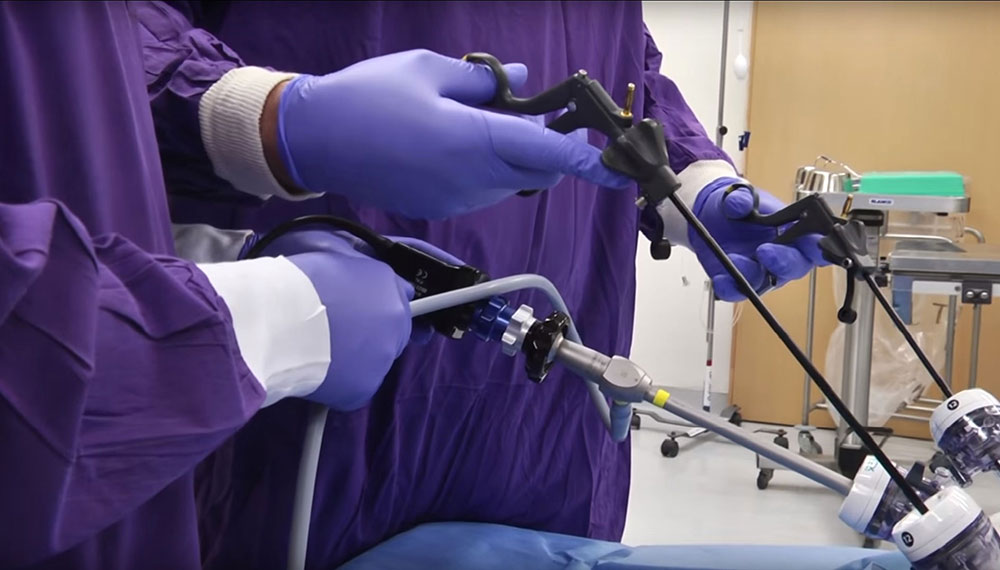 Under development by researchers of the BioDesign team at the Hebrew University (HUJI; Jerusalem, Israel) and Hadassah Medical Center (Jerusalem, Israel), the CholeVision dedicated laparoscopic tool will help surgeons avoid bile duct injuries and their devastating consequences by optically contrasting bile ducts and surrounding tissues, without changing the standard laparoscopic procedure. This is made possible due to characteristic visible red spectrum wavelength absorption by bile acids.

By using a solid-state fiber optic light source which is inserted into a clip applier or a standard clamp, light at a red wavelength range of 600-700 nm preferentially absorbed by bile acids can be directed to illuminate the surgical field. When switching the color and direction of incident light, the bile duct anatomy can thus be made visible without the need for intravascular injection of fluorescent dyes, ultrasound imaging, or X-ray images, significantly reducing the complexity of the laparoscopic procedure.

“The laparoscopic procedure is so simple and fast that surgeons are reluctant to make it complex by adding new imaging modalities,” said Muhammad Adileh, MD, a surgeon who led the HUJI BioDesign team. “We had to find a solution that wouldn’t complicate things by changing the procedure or increasing operation time.”

“We found that red light in the visible range is predominantly absorbed by bile acids in the biliary tree,” added Prof. Yaakov Nahmias, PhD, director of the HUJI Center for Bioengineering. “This is a significant discovery, allowing surgeons to carry out the standard laparoscopic procedure and identify bile ducts with a single flip of a button.”

In traditional laparoscopic cholecystectomy, four incisions are made in the abdomen: one on the rim of the navel, one beneath the navel, and two beneath the navel and to the right. A laparoscope and surgical instruments are passed into the interior of the abdomen to aid the surgeon in removal of the gallbladder. The most common reason for cholecystectomy is cholelithiasis, caused by gallstones trapped inside the gallbladder duct that trigger intense abdominal pain that usually lasts between one and five hours.