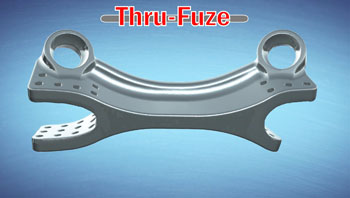 Image: The Thru–Fuze device (Photo courtesy of USNW).
A new spinal fusion device designed to reduce chronic back pain could negate the need for invasive surgery and bone grafts.

Under development by researchers at the University of New South Wales (UNSW; Sydney, Australia) the Thru–Fuze device is made of porous titanium that promotes bone growth and fusion both on and through the device after it is placed between the vertebrae. Over time, the device acts as a bridge between adjacent vertebrae for additional bone growth, resulting in rapid biomechanical fixation, without the need for a bone graft procedure or supporting metallic hardware.

According to the researchers, the device will allow faster, simpler surgery with minimal radiation exposure compared to current methods. Preclinical and laboratory testing in animal models has demonstrated rapid biomechanical fixation between the fusion device and the vertebrae. Human trials of the Thru-Fuze are expected to begin at the Prince of Wales Hospital (Sydney, NSW, Australia) in late 2016, with future commercialization of the device exclusively licensed to Intellectual Ventures (Bellvue, WA, USA). Patents for the technology have been filed in Australia, Europe, China, and the United States.

“Existing methods of spinal fusion use rod or cage systems that require screws to be drilled into the spine and a painful bone graft harvested, which is the material used to form the bridge and obtain the fusion between the vertebrae in the spine,” said device inventor Prof. Bill Walsh, MD, director of surgical and orthopedic laboratories at UNSW. “These systems are very costly, difficult and time consuming to implant and they also have variable rates of fusion success. Existing methods rely on the bone to make its way right across the vertebrae and it can take up to a year to find out if the surgery has been a success.”

“New technologies such as the Thru-Fuze are of paramount importance, as surgeons strive to deliver better patient outcomes with less invasive and more effective implant and prostheses options,” said neurosurgeon Ralph Mobbs, MD, who will lead the human trials. “The potential of the device is significant.”