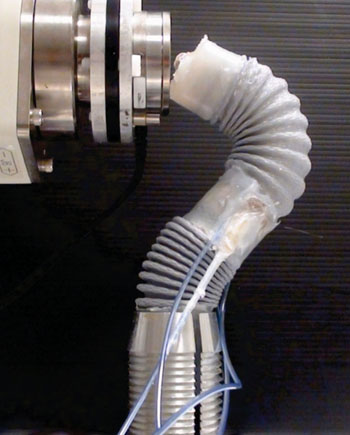 Developed by researchers at Sant'Anna School of Advanced Studies (Pisa, Italy), the biomimetic manipulator is composed of two identical modules—controlled independently—with multidirectional bending and stiffening capabilities, copying characteristics of an octopus tentacle. Each module’s movement can be directed by the graduated inflation of three cylindrical chambers equally spaced inside the module. By alternating inflation in of each of the three chambers, the module can bend and stretch in various directions.

The manipulator is entirely composed of soft materials, and can exploit its whole length to actively interact with the biological structures. Like a tentacle, the device has varying stiffness and length, easily adapting to the surrounding environment by twisting, extending, or bending in any direction at any point along its length. To mimic the variable stiffness, a granular jamming phenomenon is used, based on a flexible membrane inside the module filled with a granular media. When a vacuum is applied to the membrane, its density increases and the whole membrane becomes rigid.

The researchers performed a number of characterization tests on the robotic device, and succeeded in showing that it could bend to angles of up to 255° and stretch to up to 62% of its initial length. The stiffening mechanism was able to provide stiffness increases from 60%–200%. The ability of the robotic arm to manipulate organs while surgical tasks are performed was also successfully demonstrated in simulated scenarios where organs were represented by water-filled balloons. The study was published on May 14, 2015, in Bioinspiration and Biomimetics.

“Traditional surgical tasks often require the use of multiple specialized instruments such as graspers, retractors, vision systems and dissectors, to carry out a single procedure,” said lead author Tommaso Ranzani, PhD. “We believe our device is the first step to creating an instrument that is able to perform all of these tasks, as well as reach remote areas of the body and safely support organs around the target site.”