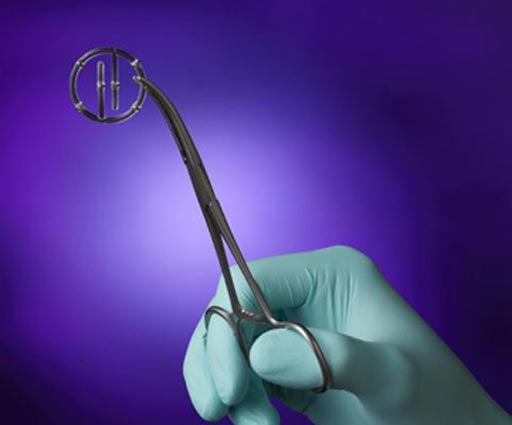 The Focal Therapeutics BioZorb low profile (LP) device has a unique three-dimensional (3D) open-spiral design that incorporates six titanium clips placed in a fixed arrangement, providing specific landmarks of the surgical site for treatment planning, delivery, and follow-up. As in the original BioZorb design, the LP model is sutured directly to the tissues surrounding the cavity where the tumor was removed. The bioabsorbable implant dissolves in the body over the course of a year or more, while the titanium marker clips remain in place.

The BioZorb is especially useful when there is no visible residual seroma, a condition encountered during radiation therapy (RT) planning that makes it very difficult to identify the target region. The 3D marker may also assist with patient positioning during treatment, as well as advanced treatment techniques such as image-guided RT and image-based tracking of the lumpectomy site during respiratory motion. The BioZorb LP device, in contrast to the original BioZorb, was designed for use in smaller breasts, in peripheral areas of the breast, and in locations with less surrounding tissue.

“Everyone understands the need for delivering more personalized, targeted and precise medical care. These new designs allow me to offer the BioZorb marker to more of my breast cancer patients,” said Alison Laidley, MD, of Texas Breast Specialists, who was among the first physicians to use BioZorb LP. “Our radiation oncologists who oversee post-surgical radiation treatment have embraced this technology. We have also seen that patients support the idea of minimizing toxicity to surrounding healthy tissues during their radiation treatment.”

Breast conserving therapy (BCT) refers to moderate-dose RT to eradicate any microscopic residual disease left over following breast-conserving surgery. The goals of BCT are to provide the survival equivalent of mastectomy, a cosmetically acceptable breast, and a low rate of recurrence in the treated breast. The success of BCT is also contingent upon moderate-dose RT to eliminate subclinical foci of disease in the ipsilateral breast.