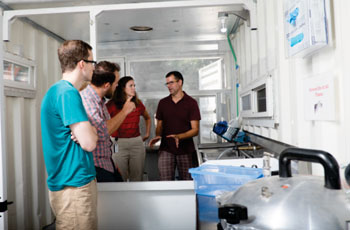 Image: The Rice University Sterile Box for low-resource settings (Photo courtesy of Jeff Fitlow/Rice University).
A sterilization station built into a standard 20-foot steel shipping container houses all the equipment necessary to prepare surgical instruments for safe reuse, including a water system for decontamination and a solar-powered autoclave for steam sterilization.

Developed by researchers at Rice University (Rice, Houston, TX, USA) and Association Soleil-Vapeur (Evreux, France), the surgical intstrument processing unit, dubbed “The Sterile Box,” is capable of handling instruments from the moment they leave the operating room to the point they are sterile and ready to be reused for the next surgery. The sterile processing unit is self-sufficient in power and water and features an intake for contaminated instruments, decontamination, sterilization via non-electric steam sterilizers, and secure inventory storage.

Solar panels and an electrical storage system power the container, including outlets for fans and for cellphone charging. Water distribution is provided by two tanks on the roof, with a hand pump to move water to one of the 200 liter tanks. The interior has two rooms: a foyer to separate the sterile processing area from outsiders and the elements, and a main processing area divided into four stations. At the first station technicians decontaminate instruments in a three-basin sink to remove debris, soak them in an enzymatic detergent, and scrub with nylon brushes before a final rinse.

At the second station an electric hotplate heats the steam autoclave that sterilizes the instruments; at the third, the instruments are dried on wire racks and then moved to the fourth station, a storage cabinet where they await the next surgery. A small window is provided to pass instruments between the processing area and the foyer. To validate the efficacy of the Sterile Box, the researchers ran 61 tests of decontamination and sterilization performance, demonstrating satisfactory decontamination and sterilization outcomes to support healthcare facilities in low resources settings. A study describing the Sterile Box was published on March 23, 2016, in PLoS ONE.

“We tried to really think hard about social context. We laid out the elements to minimize human error and water and energy requirements to the extent that we can. I really like that about our design,” said senior author Associate Professor of Business and Public Policy Douglas Schuler, PhD. “The Sterile Box may be suitable for other medical situations, including maternal and neonatal care, oral health care, and post-disaster relief.”