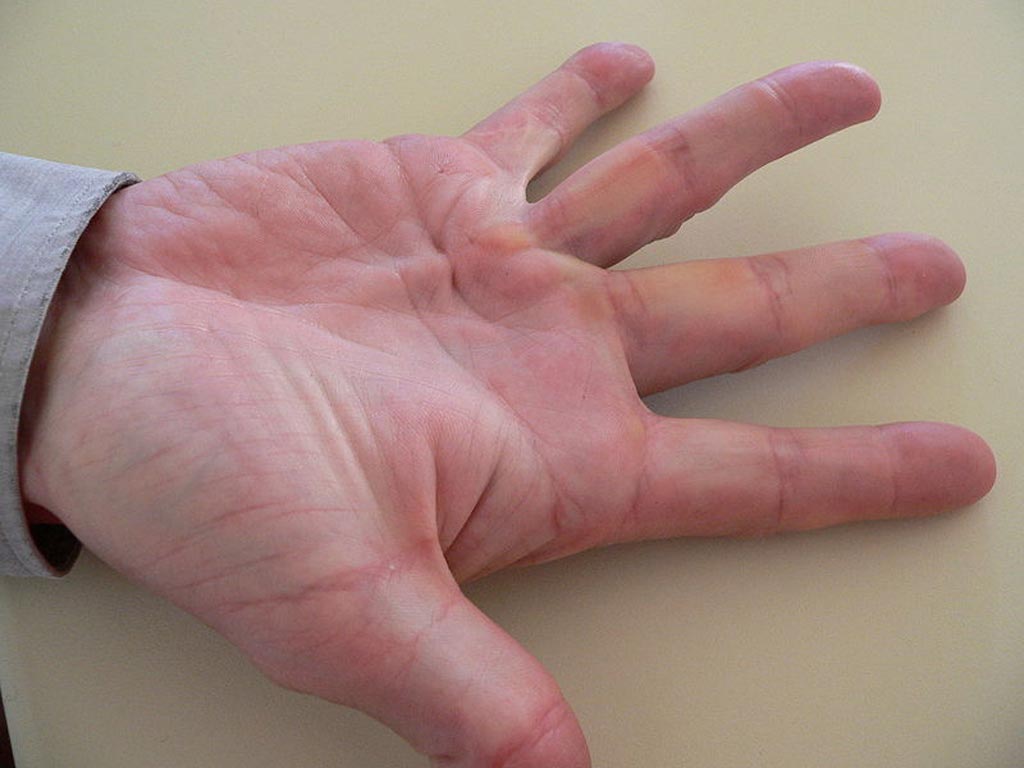 Image: An example of Dupuytren\'s contracture on the ring finger (Photo courtesy of Wikipedia).
A new study shows that needle release is just as effective as pharmaceutical treatment for treating Dupuytren's contracture, a pathological collagen disease that causes crooked fingers.

Researchers at the Sahlgrenska Academy (SA; Göteborg, Sweden) conducted a randomized, single-blinded controlled study that enrolled 156 patients with a Dupuytren contracture of at least 20° in the metacarpophalangeal (MCP) joint in a single finger. The patients were randomized to either percutaneous needle fasciotomy (PNF), or to treatment with injectable Clostridium Histolyticum collagenase (CCH). A single surgeon administered all treatments, and all the patients were seen after one week and blinded to further follow-up.

In addition to the procedure itself, 39 of the patients were examined by ultrasound both before and after treatment in order to compare the morphological appearance of the cord rupture. The patients were assessed after six months, one year, and two years by a single physiotherapist who was blinded to the treatment each patient had received. Outcome measures included measurements (joint motion, recurrence, or prevalence of a Dupuytren cord), and patient reported outcome measures.

“In my opinion, there has been excessive faith in the ability of this drug [CCH] to break down the cord better than surgery, while in many places alternative solutions have been forgotten or never even considered,” said lead author and dissertation presenter Joakim Stromberg, MD, PhD. “The needle release is not at all as troublesome for patients. This extremely simple method does not produce as much pain afterwards, nor does it require any specific rehabilitation.”

Dupuytren's contracture, often referred to as "Viking disease," is a common ailment that affects about 10% of men and two percent of women in the Nordic countries. In this condition, a cord consisting of pathological connective tissue forms on the palmar side of the finger, which over time can prevent the finger from being straightened. The pinky and ring fingers are most commonly affected, often in both hands. The disease is most common among individuals older than 60, and has also been linked to factors such as heredity and diabetes. It often recurs and needs to be treated again.