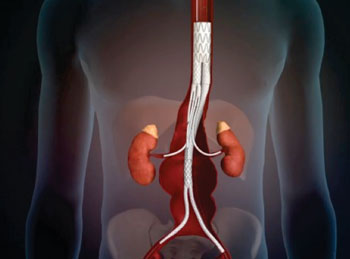 Image: The TAAA Debranching Stent Graft System (Photo courtesy of Sanford Health).
A novel branching stent graft that can be deployed from the top on down could help patients suffering from thoracoabdominal aortic aneurysms (TAAAs).

The complexity of the design required the use of computational fluid dynamics (CFD) simulations, conducted at SD State, in order to create a geometrically correct model of each graft relative to the same aorta coordinates and positioning in the body trunk, as well as the arteries that feed the organs and extend into the legs. To model blood flow near the artery walls (where atherosclerosis tends to begin), the researchers had to consider oscillating shear index, time-averaged wall shear stress, relative residence time, and wall shear stress temporal gradient.

To account for the transient pulsatile flow of blood, an extensive data table was entered into the software specifying the volumetric flow rate of blood through the system every 1/5,000 of a second, outputing a solution every 1/1,000 of a second to simulate a one-second cycle. The CFD simulations helped the researchers show that flow behavior next to the artery wall is more ordered, predictable, and moderate with the new stent design, splitting the blood flow upstream and letting it gradually come to the renal arteries. A study describing the system and the procedure were published in the November 2014 issue of the Journal of Vascular Surgery.

“Taking the complex and making it simple has long been our goal for the treatment of TAAAs. Working with Medtronic could eventually place our solution in the hands of vascular surgeons around the world to help patients facing a life-threatening condition,” said Sanford Health vascular surgeon Patrick Kelly, MD, who developed the concept. “We hope that this will have a major impact on the treatment of one of the most challenging disease processes to face our specialty.”

Degradation of structural proteins such as collagen and elastin, or a defect in their composition, leads to medial degeneration and weakening of the aortic wall. TAAA then results from a continuous dilation of the descending thoracic aorta, extending into the abdominal aorta. Subsequent dilatation results from hemodynamic forces on the arterial wall, as well as intrinsic changes in the composition of the arterial wall itself, which cause the diameter of the aorta to expand further and increase wall tension, thus creating a vicious cycle.

Medtronic plans to study the system in collaboration with physicians at several medical centers, including Dr. Kelly at Sanford Health, starting in the near future, with the purpose of subsequently commercializing the system after obtaining the required regulatory approvals.