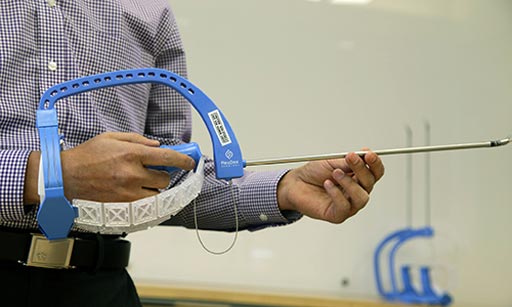 Image: The FlexdDex device enhances surgical suturing (Photo courtesy of FlexDex Surgical).
A simple, ergonomic all-mechanical device that mounts to the surgeon's arm mimics the direction of movement of their hand.

Developed by researchers at the University of Michigan, the FlexDex device is designed to precisely translate the surgeon’s hand, wrist, and arm movements from outside the patient into corresponding movements of an end-effector unit inside the patient's body. The purely mechanical instrument is based on the concept of a "virtual center" which locates the device's center of rotation at the same point as the surgeon's wrist.

“This is the culmination of 10 years of effort, and to know that the device is performing exactly as we expected it would, impacting patients' lives in a positive way - it's an amazing feeling. We always saw the potential, but now it's crystallized,” said pediatric surgeon Jim Geiger, MD, of U-M Medical School, and co-founder of FlexDex. “If I move my hand up, the device tip goes up. Wherever I move my hand, the tip of this instrument follows. No other instrument currently on the market operates like this.”

“FlexDex provides the functionality of robots at the cost of traditional hand-held laparoscopic instruments. It's kind of like the transition from mainframe computers to smartphones. You hardly need a manual to use it. It's just intuitive,” said mechanical engineering Professor Shorya Awtar, PhD, co-founder of FlexDex. “Our mission is to democratize minimally invasive surgery and expand its use around the U.S. and the world.”

FlexDex's core technology is the outcome of basic research and innovations in parallel kinematics, virtual center of rotation, and flexure mechanisms undertaken at the U-M Precision Systems Design Laboratory. Professors Geiger and Awtar, who established the technology, have joined forces with medical device entrepreneur Greg Bowles to found FlexDex Surgical, in order to translate their research into commercial medical products.