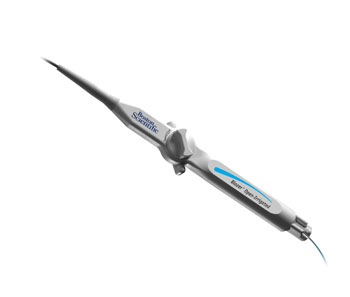 The Blazer open-irrigated (OI) RF ablation catheter is indicated for cardiac electrophysiological mapping, delivering diagnostic pacing stimuli, and RF ablation of sustained or recurrent type 1 AF in adult patients. Contraindications include patients with an active systemic infection; those with a mechanical prosthetic heart valve; patients unable to receive heparin or an alternative anticoagulant; patients who have vena cava embolic protection filter devices; those who are hemodynamically unstable; and those who have myxoma or an intracardiac thrombus.

The ablation catheter features bidirectional steering, predictable trackability and torqueability, fine micromovement, and high tip stability and contact. A unique feature is Total Tip cooling, a technology to cool the catheter tip consistently during the procedure, thus improving the quality of the ablation lesion. The Blazer OI ablation catheter is intended for use with the Maestro 4000 RF Controller and the MetriQ irrigation pump, and is available with a range of tip curve styles, including standard, large, extra-long, and asymmetric. The Blazer OI ablation catheter is a product of Boston Scientific (Natick, MA, USA), and has been approved by the US Food and Drug Administration (FDA).

“The Blazer open-irrigated catheter is safe and effective for the ablation of atrial flutter," said Prof. Tom McElderry, MD, section chief of electrophysiology at the University of Alabama at Birmingham (UAB; USA), who participated in the BLOCk-CTI clinical trial of the device. “This newly approved ablation tool was built on the proven Blazer platform of therapeutic catheters and facilitates excellent maneuverability, consistent cooling, and stability during procedures.”

Cardiac ablation is a procedure that is used to correct structural problems in the heart by scarring or destroying tissue that triggers an abnormal heart rhythm, especially supraventricular tachyarrhythmias such as AF, atrial fibrillation, and atrial tachycardia. The low-risk procedure takes 2–4 hours and is most often performed in an electrophysiology or a cardiac catheterization lab. It is successful in about 90% of the people who have it.