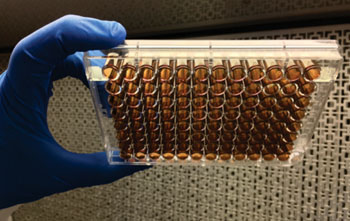 Researchers at the Commonwealth Scientific and Industrial Research Organization (CSIRO; Melbourne, Australia) have developed a one-step polymerization-deposition process to manufacture aminomalononitrile (AMN), a hydrogen cyanide (HCN)-derived complex nitrogenous polymer. They found that the polymerization, when carried out in buffered aqueous solutions, can be used to coat a wide range of organic and inorganic substrate materials. The robust, non-cytotoxic coatings also provides for excellent cell attachment, suggesting potential biomedical applications.

According to the researchers, the non-toxic coating chemistry is adhesive and will coat almost any material, thus allowing for the immobilization of other compounds, including metals, both during coating formation or by performing secondary immobilization reactions. Silver compounds, for example, could be added to produce an antibacterial coating for catheters to avoid infections. Other compounds could be added to orthopedic implants to reduce friction, make them more durable and resistant to wear. The study was published on November 13, 2015, in NPG Asia Materials.

“The human body is a complex system, so there is a lot to consider when implanting artificial parts. Reducing the likelihood of infection and ensuring the body doesn't reject implants are ongoing medical challenges; that's why coatings on these implants are needed to help them to do their job,” said senior author Richard Evans, PhD, of the CSIRO manufacturing flagship. “We wanted to use these prehistoric molecules, which are believed to have been the source of all life evolving on Earth, to see if we could apply the chemistry in a practical way.”

Prebiotic chemistry (or chemical evolution) is the study of the chemistry required for producing the key molecules that eventually led to the origin of life. Experimental prebiotic chemistry started with a famous experiment by professor Stanley Miller used methane, hydrogen, ammonia, and an electrical spark to create complex organic compounds. Other HCN polymerization studies showed that prebiotic chemistry could have been a potential source of amino acids, nucleobases, and peptides on earth, and appear to be common throughout the solar system.